User-created levels for Abuse. Single levels are usually loaded with "abuse -f [filename-of-level.SPE]". More elaborate mods may require special installation locations, typically a specially named subfolder in the "ADDON" subdirectory of Abuse (marked as "Addon" in these listings). These are loaded with "abuse -a [name-of-addon]" where the name should match the directory and .LSP file, but check the documentation—a few use roll-your-own install procedures that might not adhere to the normal addon protocol. If you want even more alternate levels you might also be interested in trying fRaBs.

Levels by other authors

"more Abuse (Steven)" by Steven Chan and Christopher Chan (Addon)
A quality five-level adventure that has levels which are challenging but for the most part not over-the-top, and look pretty good too. There are a small number of new graphics, some of which look slightly too clean to fit in with Abuse's grungy environment, IMO, but they still mesh mostly okay with the game's existing ones and I particularly like the starry background that appears in one area. Do note that on one of the levels it's possible to backtrack with the jetpack and fly off the top of the screen—don't do this! It will get you stuck as Nick will never come back down. 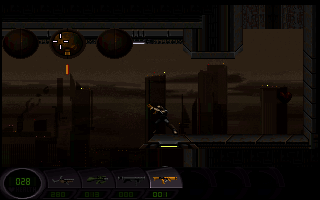 Torture by Craig Redinger (Addon)
A well-made and tough level with some nice secrets to find here and there and the occasional clever puzzle to offset the bloody battles. Save stations are a bit sparse so you may want to backtrack to the last one you passed when the going gets tough, especially since some of the situations you'll be dropped into can be quite hard to survive on the first go. Some new graphics, although some are borrowed from Doom, and some of them work better than others. 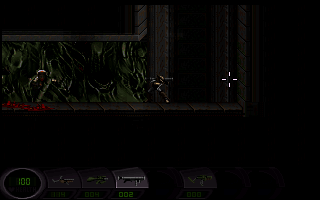 "Rougan" by Shawn M. Pezzuto
Two individual levels (the second does not automatically load after the first; you have to load one or the other). The first level is a pretty linear affair consisting of pushing forward through a set of increasingly difficult trap/onslaught scenarios, and starts off a bit ugly though it improves towards the latter part of the map. The second level shows that the author's skills with the editor increased, though, with a somewhat more elaborate and connected layout. There's some interesting use of a grating background as a "ladder" which is mentioned in the text file, which is a good thing because it might have been confusing otherwise. These levels might be a touch basic, but not really bad. 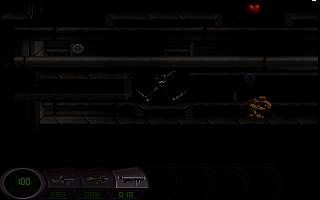 "Mike1" by Mike?
A short level where you have to blast your way through secret passages to escape. Near the beginning one can destroy a bunch of ants with a rather cathartic death turret pit. There are no save stations, and only a little extra health, so avoid damage as much as possible! 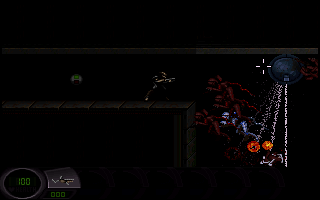 Toasty by Ryan Cassidy
An "extreme" type of level that gets its title from the copious hordes of napalm Ants you'll be encountering. There are lots of tricks and traps and you will probably die a lot of times in the attempt, but the level can be cleared. I found two "stuck" situations in my attempt: flying off the top of the screen in one spot, and picking up a respawning powerup that would replace the one you need. There are several places where some tight gaps are "sticky" and you'll have to jump and wiggle to get through, and a few tiling oddities around the edges of some backgrounds, but it's otherwise decently made. 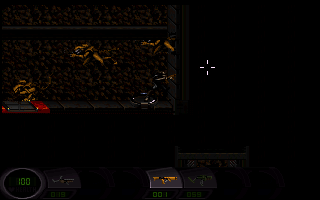 "Trench" by Justin Cassidy
A short, moody level with a few tricky challenges. It's quite dark, but the tilework is nicely done. 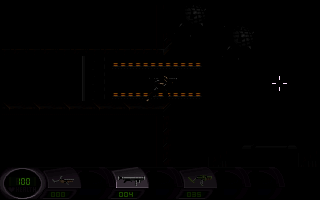 "SPLUNK!" by Protobob
A rather nicely made, if somewhat short, level taking place in a dark, spooky cave. Purportedly one of the earliest custom levels for Abuse ever released. 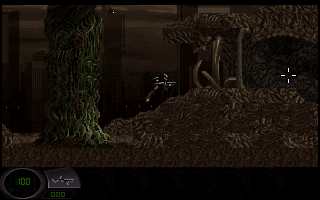 "Inferi" by Claudio Bolzoni
A pair of fairly challenging levels with tons of tricks and traps packed into them. According to the author "[t]hese levels are meant to be average in difficulty for experienced players and tough for beginners." I guess I'm a beginner by these standards because I'd call these expert-class levels that are not for the faint of heart; I particularly had my doubts about the electro-plate gauntlet near the end of the second level but I did eventually pass it and confirm that both levels are indeed beatable. 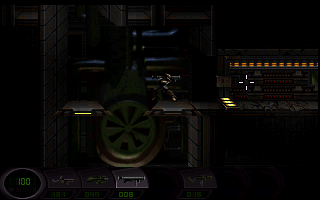 "MadMike" by Michael Moss
A well-made, tough level with a lot of traps and tight ammo supply. Some sections of the level branch so that you can do them in varying order. 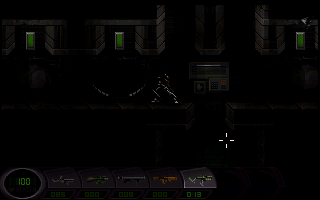 "Die Hard" by Thomas W. Kincaid
A linear level where you drop onto the roof of a skyscraper and have to descend. The tilework is rather amateur in places and the gameplay's not that interesting, but the ending is kind of cool. 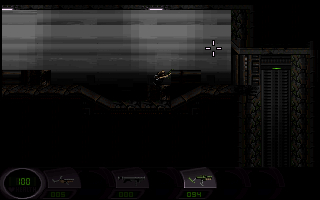 "Twisted Minds" demo by Profound (Addon)
An incomplete demonstration version of what was intended to be an unofficial expansion pack, with a new story taking place after the end of Abuse. First level soon causes a "nil is not a number" Lisp error on Abuse v2.0 for DOS—I'm not sure if it worked okay on other versions or if it's a bug across any version of Abuse. The other maps are a Super Mario Bros. level that also seems to work incorrectly, and a couple of levels demonstrating rideable creatures which work and are kind of cool, but still just demo maps rather than substantial adventures. There are a few other points of interest such as the "Death Ray" weapon (which appears in some other mods and in fRaBs, and is essentially Quake II's BFG adapted to Abuse, but purple), music changer triggers, and a save-anywhere feature. Overall, this demo pack seems to generally be less for playing and more an example of what the full pack, which as far as I know was never completed, could have been. Modders might find it interesting to see some of the things that could be done. 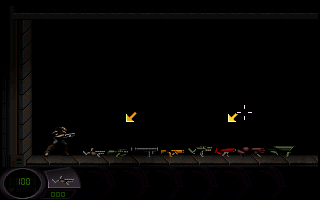 Total conversions by other authors

"Banana v0.71" by Steven Chan (Addon)
A simple mini-game where you move the gorilla back and forth to try to catch as many bananas as possible. Not all that much fun but provides an example of the sort of modding power Abuse has to offer. 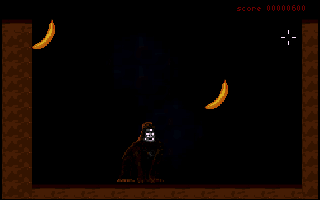