Here you can find levels and add-ons for Rune. Make sure you check the documentation for additional info on how to play them, for instance what map you should load to begin with and where to put any requisite textures and sounds.

Unless otherwise noted, you should assume that all of these add-ons were designed for the original Rune/Rune Gold. They probably work with the Rune Classic re-release as well, but if you run into any strange problems, try them with Rune Gold. The GOG release of Rune Classic, at least, offers Rune Gold as a downloadable extra.

If you want, you can jump directly to a subsection:

Singleplayer levels by other authors: Collected levels which can be played in single player. These were played to completion to make sure that they work, or until bugs were encountered that halted play, where noted.

Arena-vs-monster style levels by other authors: Collected levels which can be played in single player against monsters, but are based purely around combat with no adventure to speak of. These were just played long enough to get a feel for what they're about.

Modding example levels by other authors: Collected levels which serve as an example of a mod the author has done rather than as a more properly playable map.

Single player levels by other authors

"SP-Nidavellir" by Simon West-Bulford (EZkeel)
A good four-level adventure that has you fighting a variety of enemies but with an emphasis on dwarves. The plot is that you have to destroy six icons of power that can re-invogorate Loki, crafted by an alliance of the dwarves and a group of evil druids. Nicely designed levels with good visuals and loopbacks between various parts of each map. Do note that there's a potential crashing bug on the second level, to avoid it, wait a short while before you leave the starting spot so that the enemies can get into the positions the script expects them to be in. 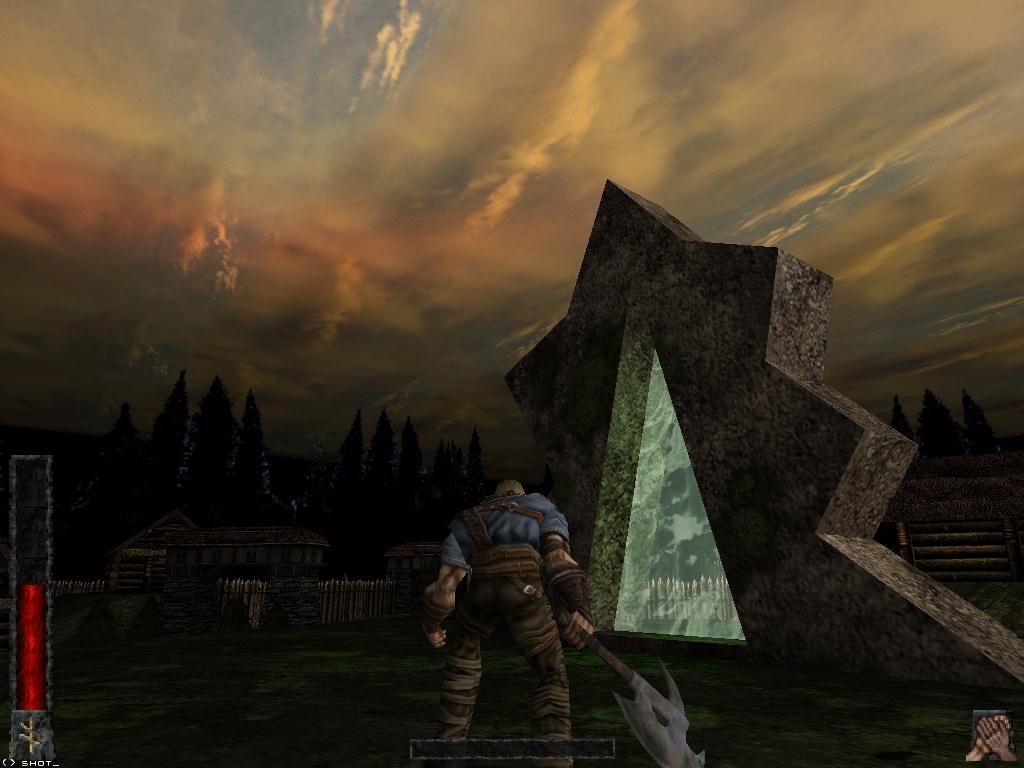 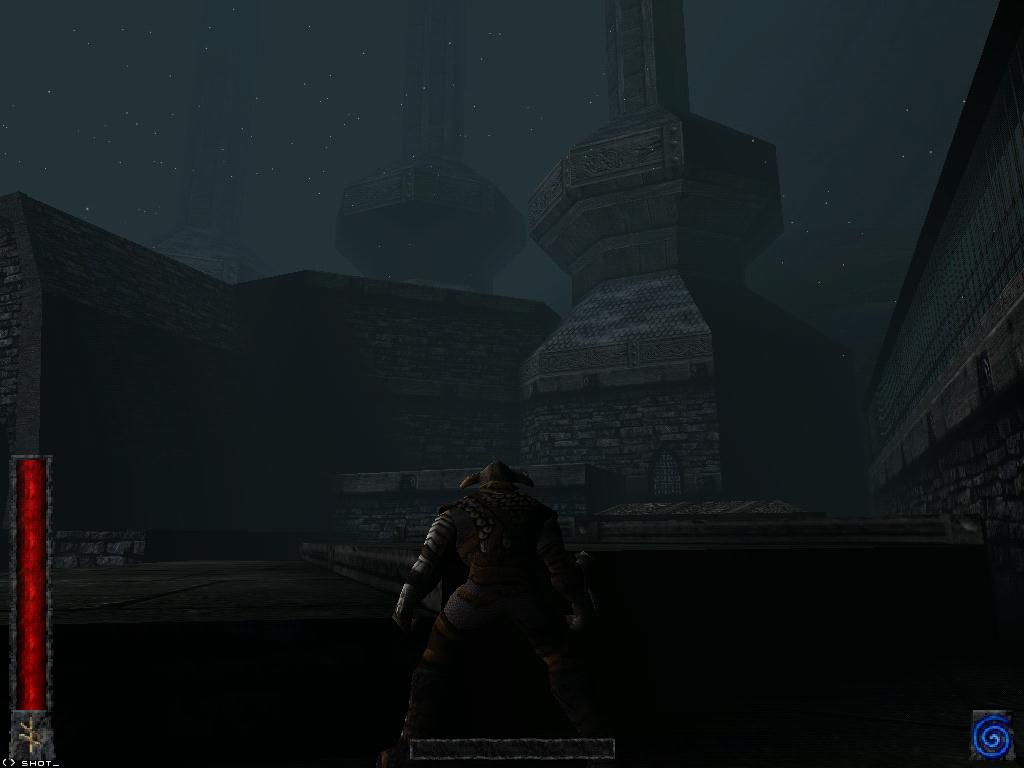 "No Title, this is unfinished business" by Andreas "Haltyr" Winkelmann
Don't be too put off by the title—while this set does end on an "unfinished" note, it's one of the longer and better Rune adventures out there. You'll travel through a wide variety of environments such as caves, an evil fortress, an icy gorge, and a medieval town. I did eventually reach a point where the cutscenes consistently glitch out and make it impossible to progress—even if you hit spacebar to pass the looping cutscene you won't be able to go any further beyond picking up the life rune and will be trapped. It's too bad that the level set wasn't properly completed, but despite this, it's a good meaty journey up to that point, with cool vistas, some intense battles, plot twists & turns and a bit of humor thrown in as well. Make sure to take note of the install instructions in the text file for proper placement of the files. 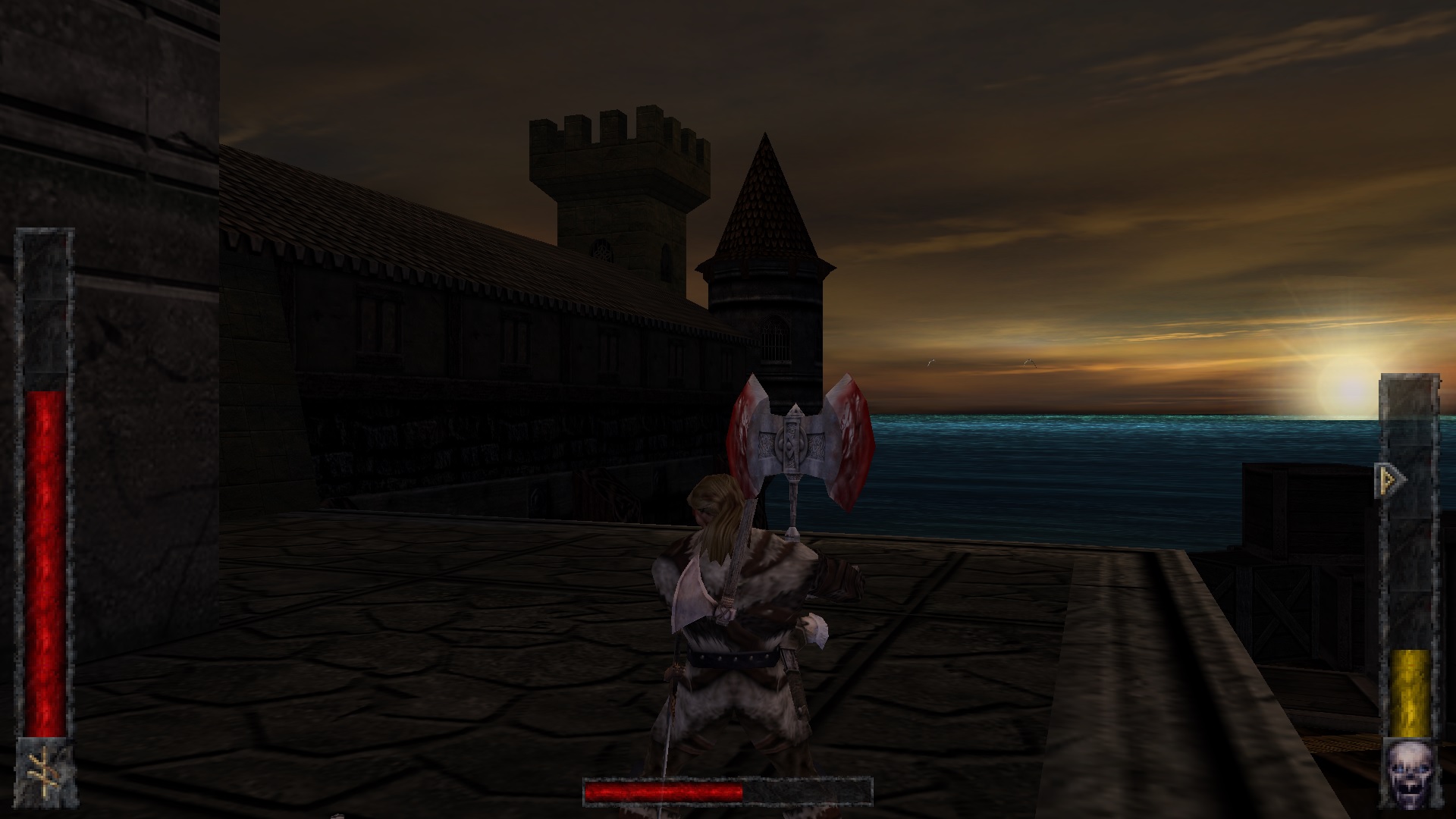 "Making of an Odinsblade - Part I" by Richard Woods - aka Fragmeat
A pretty good adventure. The levels are well-made and have a fairly coherent plot as well, where you go to visit friends in another village only to find that they've been taken captive by goblins and you have to free them. It's apparently part one of a larger story but as far as I can tell, the promised part two never got made. I could complain that that some of the voice acting is pretty bad (both in terms of badly acted and badly recorded) but when you consider the sort of equipment that was available when this was made and the fact that the people doing it were pretty young, it's fairly impressive that they went the extra mile to have voice acting at all. Make sure you install this correctly, with the sounds file in your Rune "sounds" subdirectory, not the "maps" one as you do for the level files. 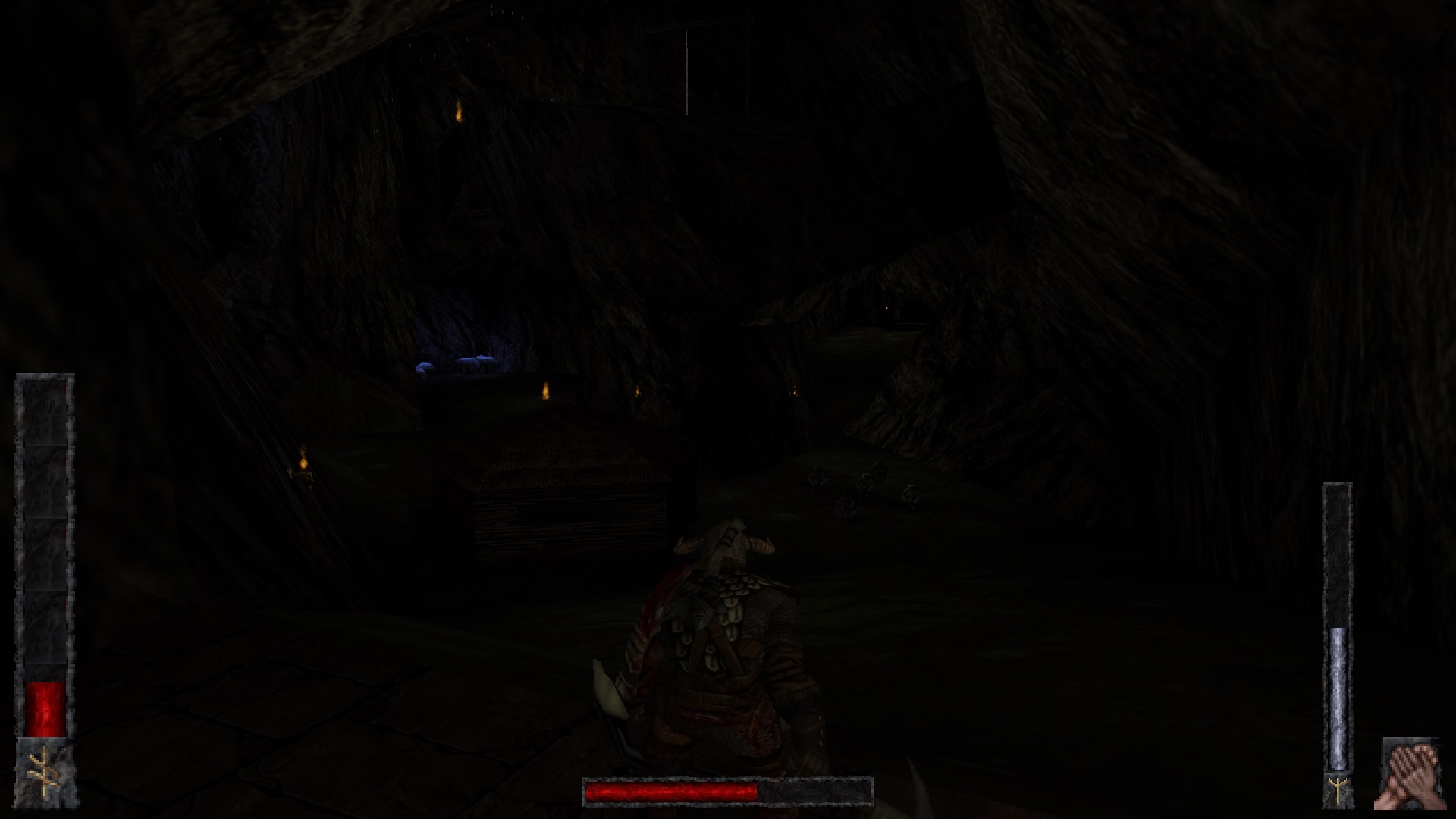 "Kuolema" by Aligator
Big ideas with poor execution sums this up succinctly. The first map sets up the story with a bunch of tedious fetch quests, no combat here. The next couple of maps have big fields full of enemies most of which you can (and in some cases should) just avoid. There seem to be no health restores until later levels and if you're not careful, falling damage could do you in if you were already low on health. Once you reach the next town, the plot thickens some, but from there things devolve into a lot of really obnoxious, fiddly platforming and pitch dark areas where carrying a torch is pretty much mandatory, so try not to lose or waste the ones you find. There are also some strange, error-looking uses of solid color textures, but I get the impression it may be a deliberate design choice. On reaching the big statue in the fifth map, I wasn't able to figure out any way up to the exit to make progress... even trying to jump off the goblins' heads didn't seem to work. Cheating to pass this point gives a few more levels with some slightly interesting puzzles and such but also some pretty tedious corridors full of enemies, and finally a boss after which there's another problem with a missing file. I think that the last map might just be a victory sequence though, I'm not certain. There is some strange and off-color dialogue as well, seemingly written by someone with a slightly lacking grasp of English. It's weird enough to seem kind of off without being quite nonsensical enough to come off as a parody adventure, and I wouldn't recommend it for the easily offended. It seems like the author had the idea for this grandiose RPG-like story in mind, but it doesn't really pan out in the implementation.

One of the dialogs also references a prior adventure called "Crisis Conflict" which I haven't yet found any surviving download of, although there are videos of it on YouTube. Have it? Please send me a copy. 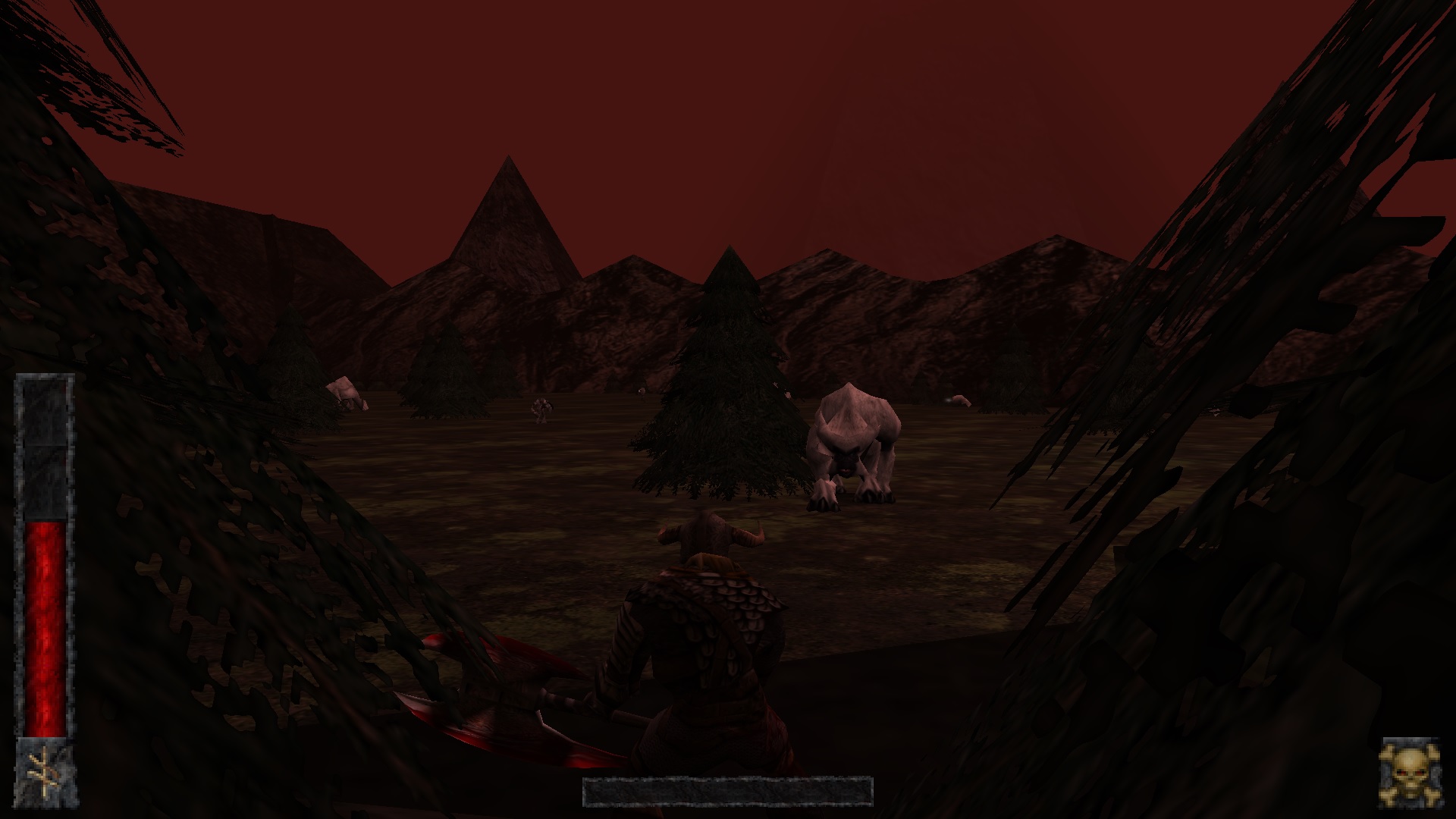 Dwarven Treasure Hunt by (BDC)Killzone
Eight maps maps that are ugly, flatly lit, and have quite a bit of weird geometry in some places. The first map is just a descent through a whole bunch of chutes, some of which can kill you if you don't go down them just right, and it's not until the third map that you get to actually pick up a weapon and fight. Starting with the maze level, some of the triggers to take you from one level to the next don't work right, so I had to start loading the next level manually for a few of them, which resets your weapons and powerups but fortunately there's more when you need them, generally. Essentially, this set breaks down into monsterless maps with tricky navigation, big arenas against giant monsters, or more standard but dull levels; the only one that really stands out as having a more interesting plot or scenario is the prison level which was almost slightly worthwhile, but by that time the set is almost over. Not recommended. 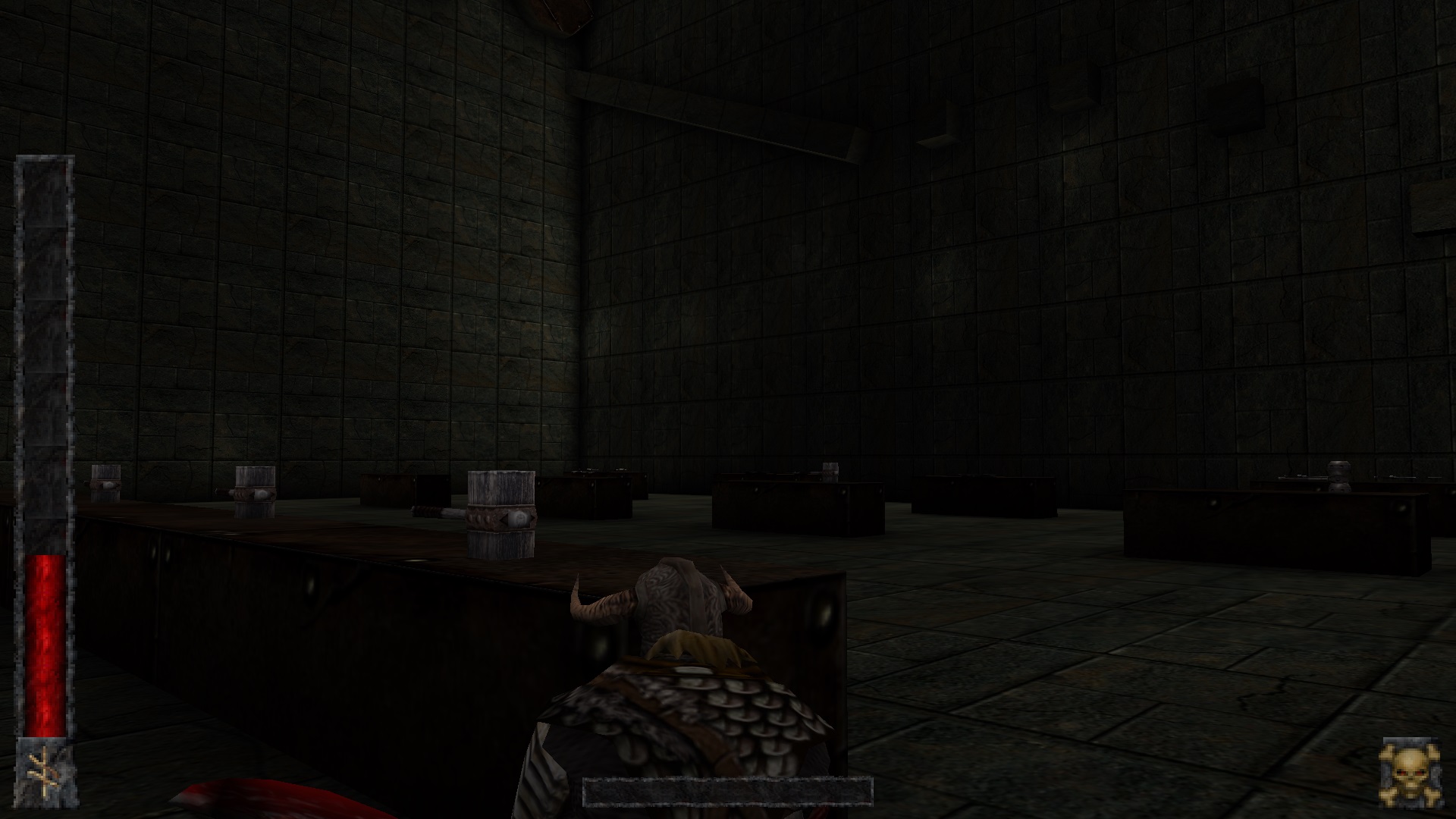 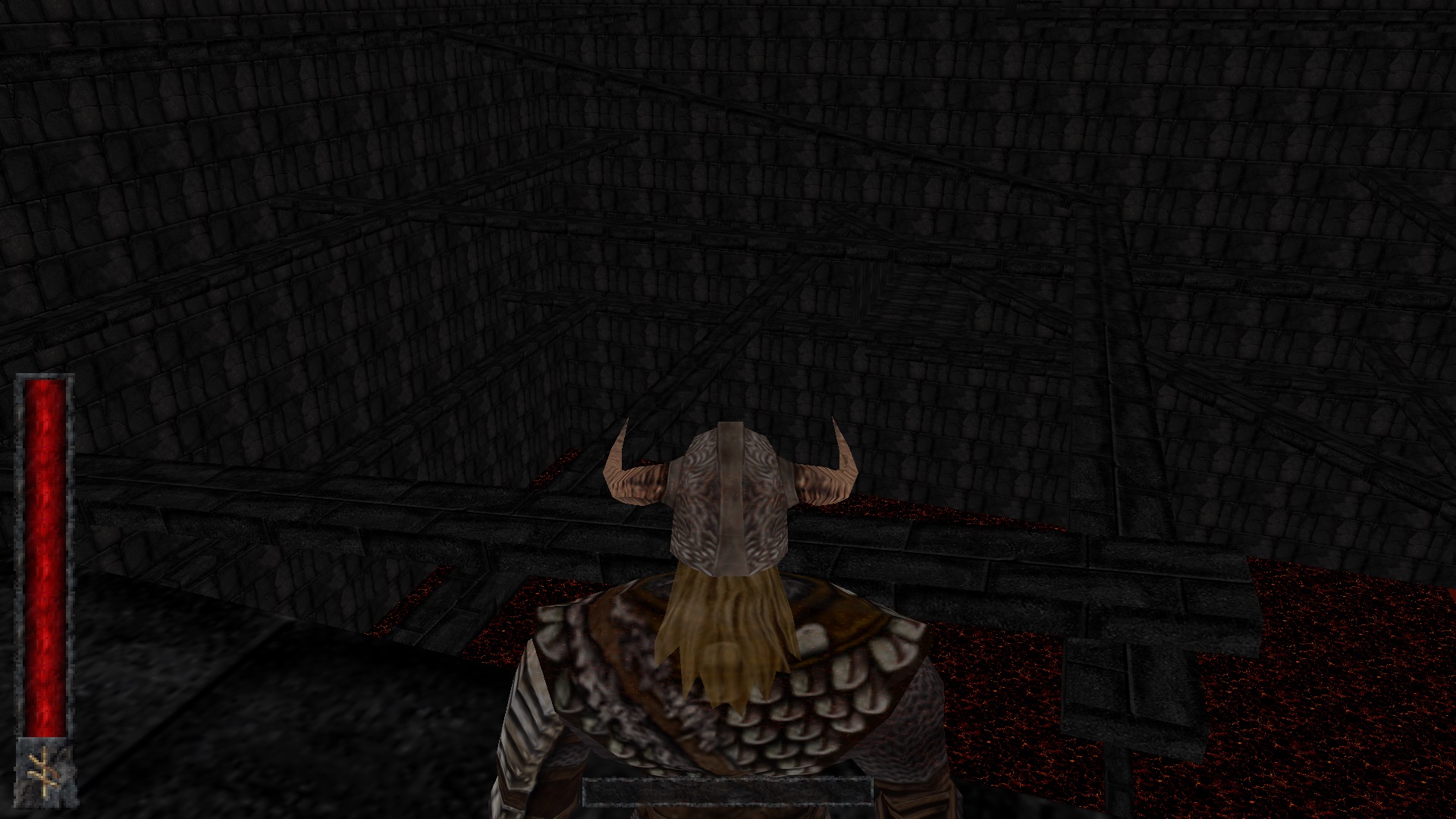 Monster-arena levels by other authors

"Sparena" by Richard Woods aka Fragmeat
A customize-your-fight level where you're allowed to pick a weapon, a shield, a type of opponent, and a number of opponencts from one to eight. You can also take rune power, life and berserk powerups before the fight if you want. Once you've made your selections, you go into the arena and hit a gong to activate the enemies you've selected. If you win, you get a message that suggests trying again in a harder fight and the level loops back to the beginning (while letting you keep the weapon and life extension you may have chosen, which seems like circumventing the rules just a bit). Quite well done as this type of level goes. 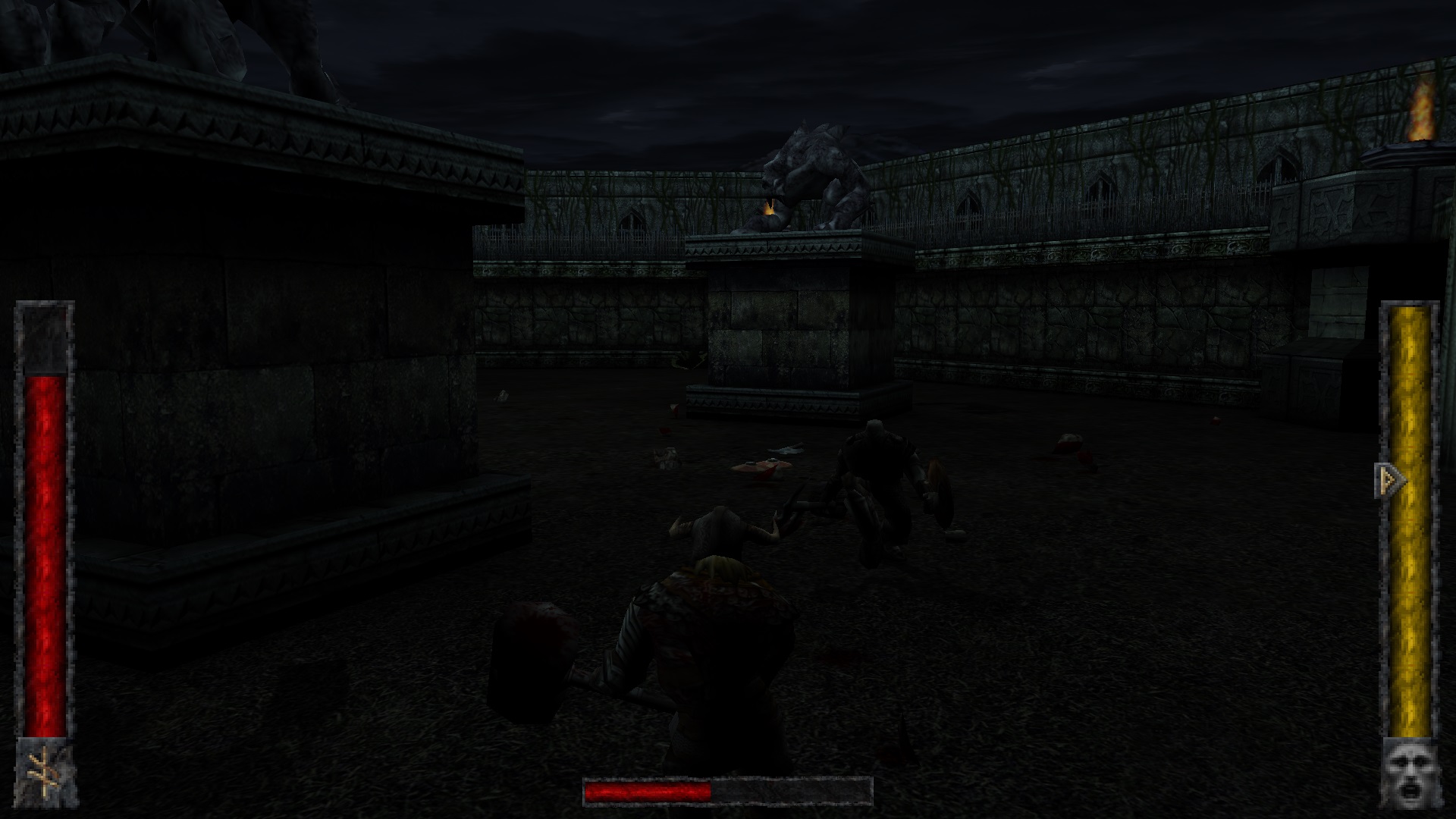 "GoblinGibz" by Keebma
This level is essentially a small deathmatch-style arena with a raised central crag that has healing items and all the weapons at the top, and some rune powerups on the lower tiers. The single-player experience is just massacreing an endless horde of goblins that spawn in until you die, with none of the adventuring elements you might expect from a single player map. 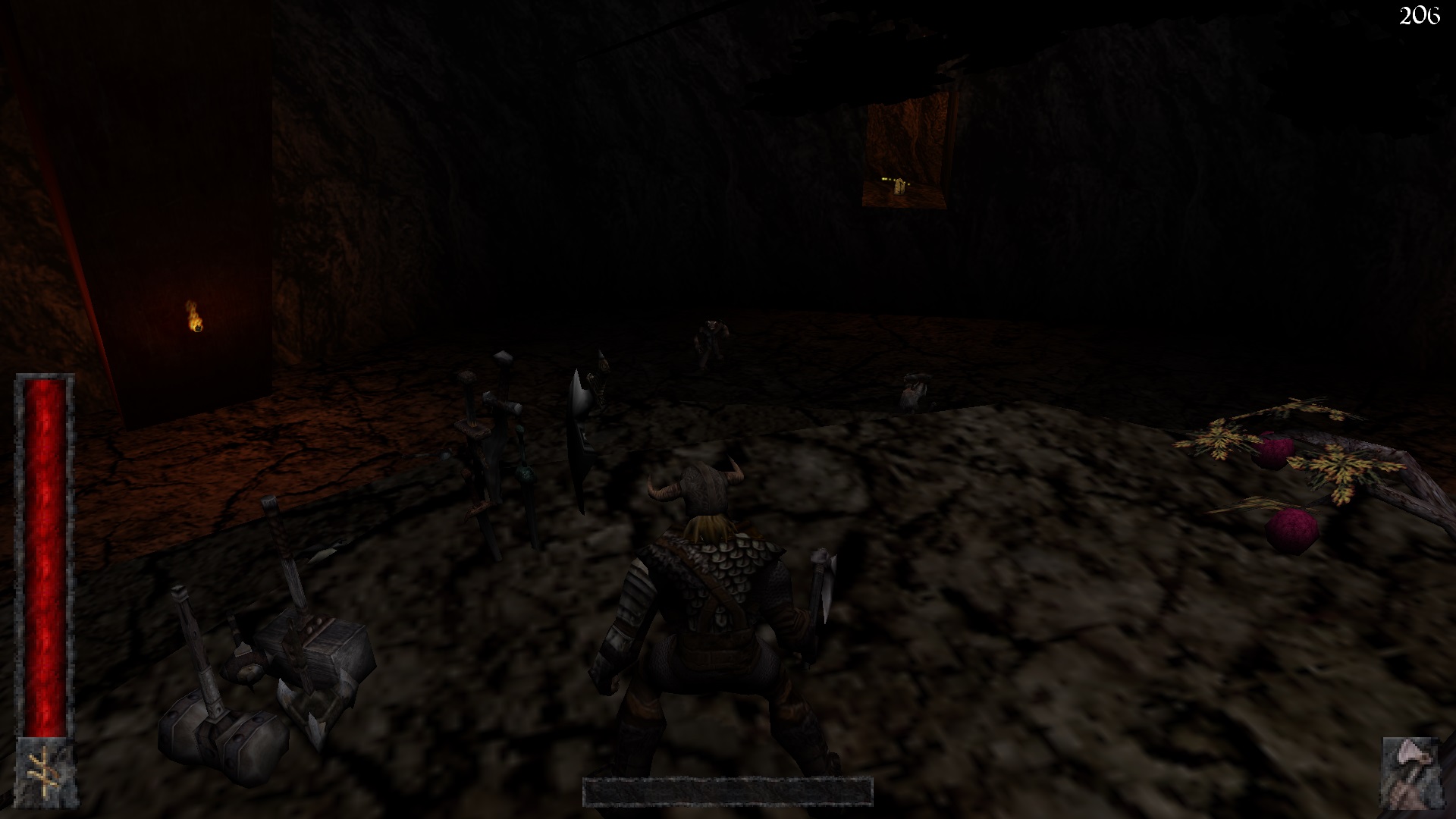 Modding example levels by other authors

"TestMap" by vitaminc
As the title says, this one is a test map of the author's various modifications. Included are alterations to both weapons and enemies, including an allied warrior who helps you fight the monsters and a couple of spooky red guys with glowing eyes (I guess they're the "monsters from HELL" mentioned in the text file) alongside the more standard zombies and worms. The level itself consists of a main room with weapons and a banquet table, and a couple of side rooms where the tougher opponents are waiting with their line of sight blocked off so they won't come after you until you come after them. The map plays in multiplayer mode so if you get killed, you just respawn with things as you left them. It's too bad this wasn't continued as there were some promising ideas but as it is the experience isn't very substantial.
The author also kindly included a... peculiar screenshot in the ZIP file. 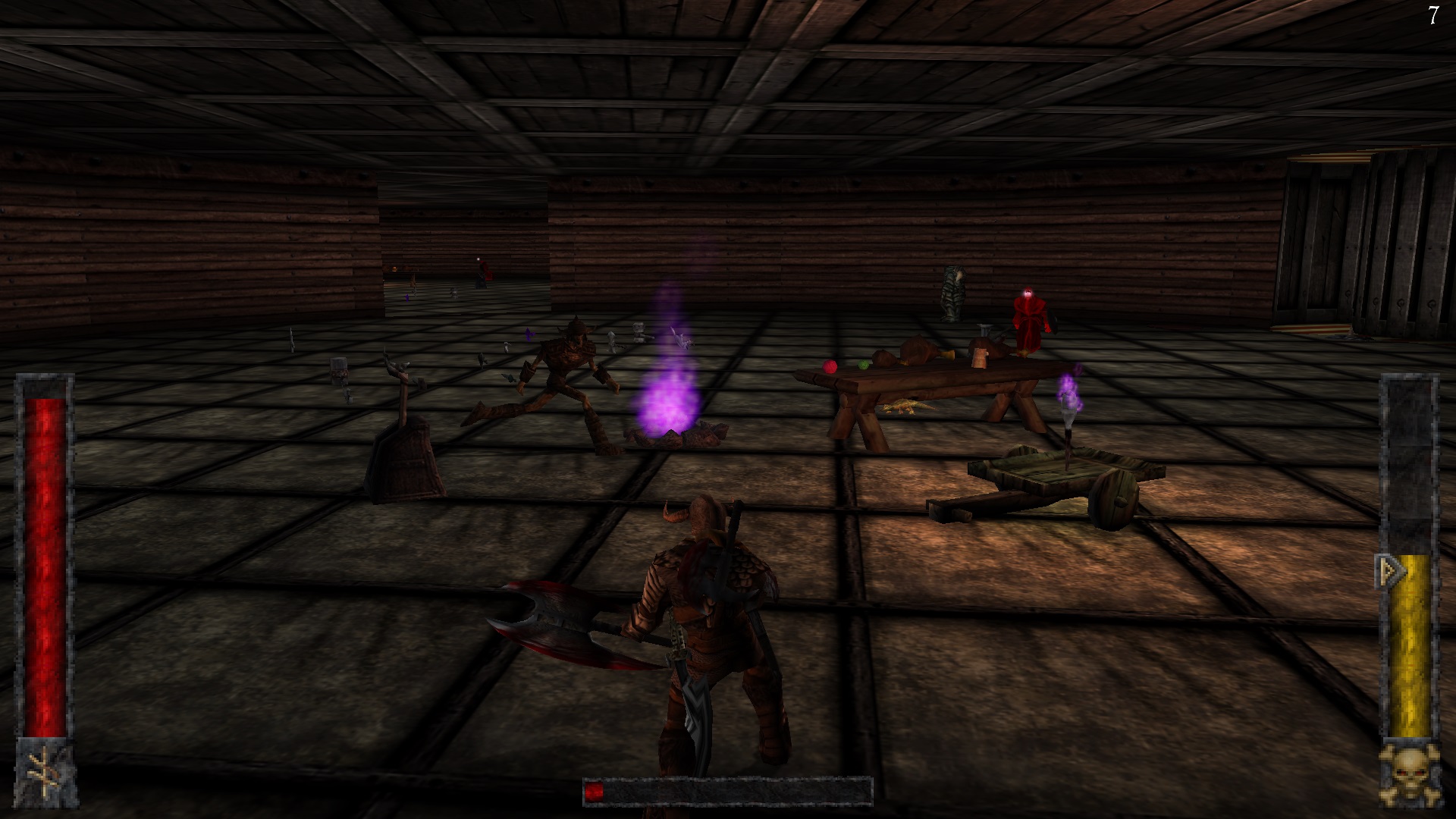 "SP-Vikings" by Anthony "Jetrell" O'Donnell
This is more of an example map than a proper level. The author got the vikings to patrol around by grafting some of the zombie AI onto them. It shows; they kind of shamble/hobble around rather than doing a confident viking strut the way I'd prefer them to. It's also rather buggy in that they don't always alert to the player's presence and can sometimes remain oblivious even as they're getting chopped up, in which case they won't drop their weapons if killed while still in patrol mode. As far as using the level for play purposes, it can be rather challenging to kill the boss viking but that's about all there is going on. Not recommended unless you want to learn from the modding technique it showcases. 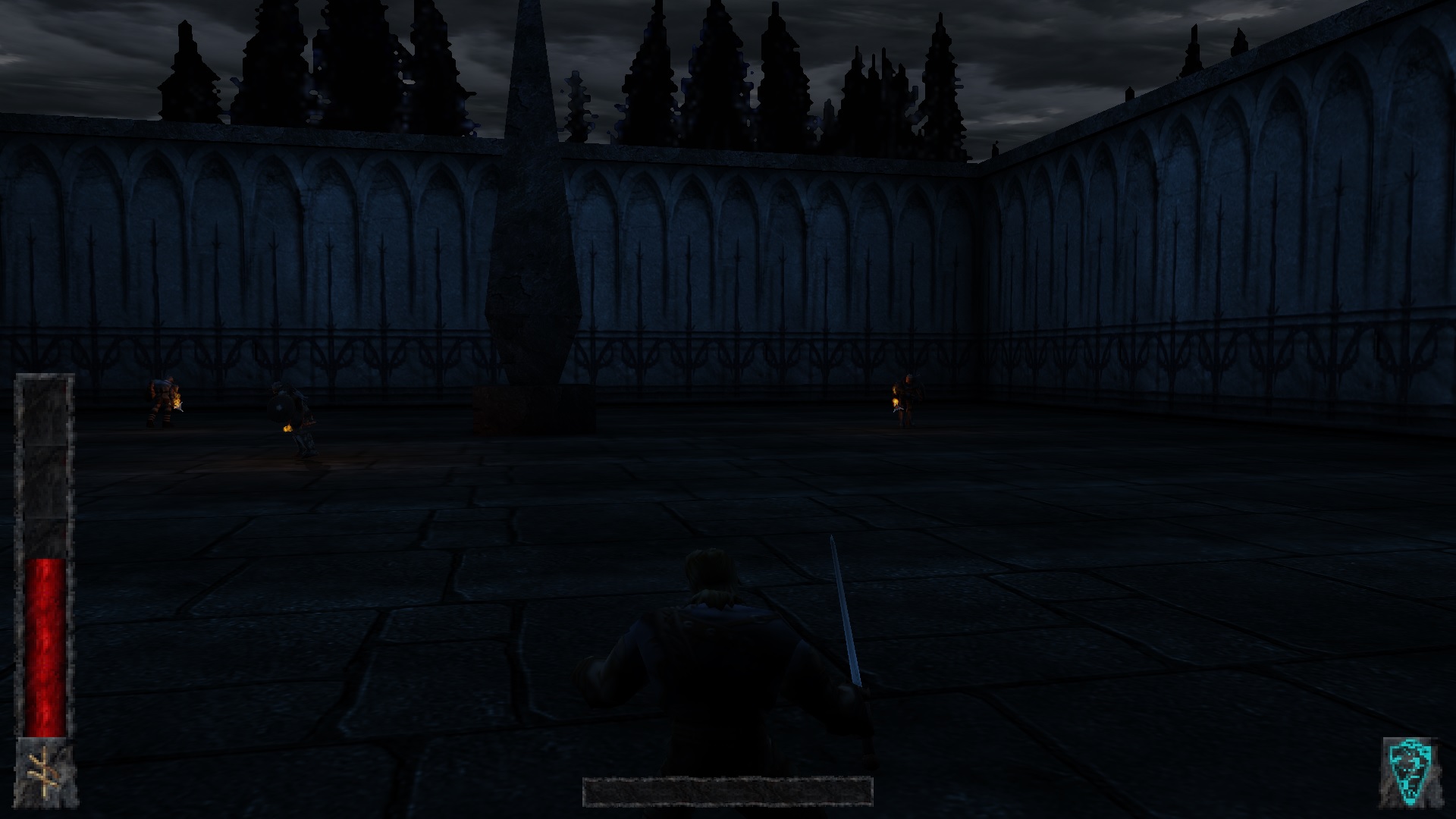