Here you may find information on the various versions of Witchaven and Witchaven II that exist, as well as downloads for the demo versions. Note that the version number which appears at game start is often unhelpful as multiple versions were released which report the same version number. The page is a work in progress and some versions (particularly patched versions) might not be listed yet.

All demo versions of the game are limited to the first three levels and most appear to be based on a beta version of the game, using older versions of some graphics and other data, as well as different game rules. The exception is the 3-Level Interactive Preview which appears to be a cut-down version of the retail release with the same data and rules. There was no demo release of Witchaven II that I am aware of.

A few noticeable differences in the "beta demos" include:

Several versions of the Witchaven demo exist. There don't appear to be differences between the .MAP and .ART files in the demo versions except for the CD preview version, and I am not sure of the exact .EXE differences. I have also attempted to provide a (partial) list of physical releases that contain the different demo releases.

Official full versions of Witchaven. To use the patches just unpack them into your Witchaven directory and overwrite the files (for the 3-button mouse patch you will also have to reconfigure the game settings). Only use one patch at a time.

All versions that identify as v1.1 have an issue with wall-mounted sprites (fireball-shooting gargoyles, etc.) which causes some of them to be clipped off on edges. This is probably the result of an internal change in BUILD. The EGWH1 rebuilds inherit this problem as well; it might not be fixable without patching the map data or the BUILD engine code.

Official full versions of Witchaven II. There was presumably an earlier v2.0 but I have not come across a clean version of it (all known CDs have v2.0c).

Versions that appear to be hacked, cracked, etc.

Various forms in which the games have been distributed. Most of these are based on used, pre-opened copies of the game so take them with a grain of salt when it comes to which discs are originally meant to go with which packages; it's as accurate as I can make it given the information available to me. 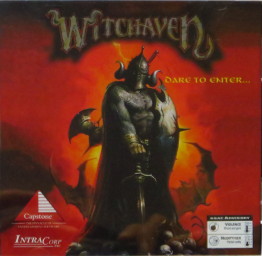 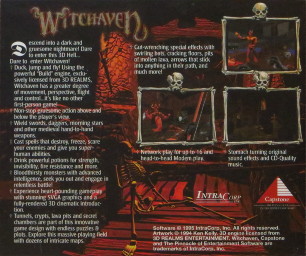 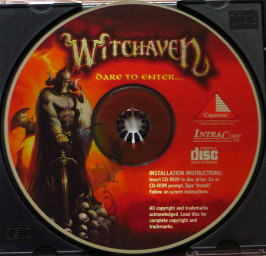 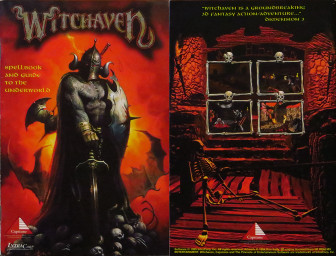 USA big box retail release of Witchaven II displaying Ken Kelly's "Field of Fury" on the box cover, full color manual cover, jewel case insert and CD-ROM. Includes manual (aka "Spell Book and Battle Guide"), registration card (I am possibly missing a command reference card.). The Witchaven II logo on the box front has a shiny gold effect which doesn't capture well in photographs, and the box has printed top and bottom flaps unlike the one for Witchaven I. The CD-ROM face includes the "Blood Vengeance" subtitle. 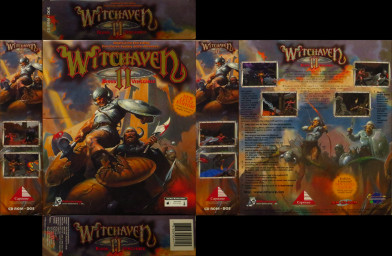 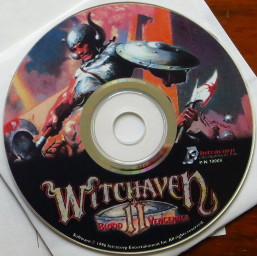 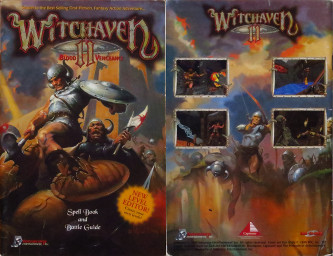 Appears to be a jewel-case-only re-release. In addition to the game itself, the data on the CD-ROM includes a CompuServe demo and a text file containing a heavily cut-down version of the Witchaven manual, covering only the most essential points. 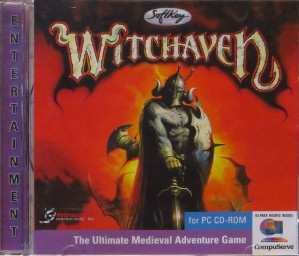 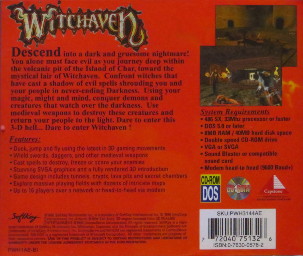 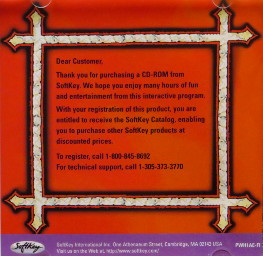 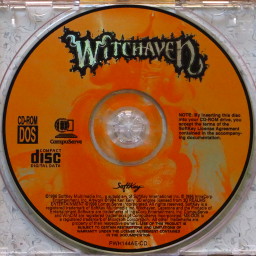 A different print of the Witchaven II CD-ROM that appears as if it may have been for a jewel-case only release. The CD-ROM face is illustrated with a different cropping of "Field of Fury" and lacks the "Blood Vengeance" subtitle but has installation instructions printed on the disc. Since the jewel case covers lack a bar code this may go with the big box release. 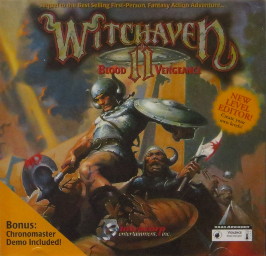 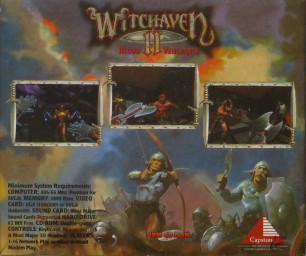 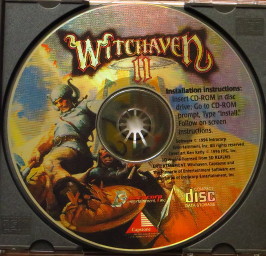 The big box uses a printed outer sleeve design with a plain white inner box, similarly to the Witchaven I release. The front cover of the box is a meld between "Death's End" on the left and "Field of Fury" on the right. Includes Sonoma MultiMedia registration card, an instruction sheet on using the games under Windows 95, and the Witchaven and Witchaven II command reference card (manuals are missing/not included in my copy of this). The disc face itself uses a plain font, rather than the Witchaven logo font.

NB: My copy of the box has some damage on the front, so the unwrapped box image shown here was digitally restored to approximately what it should look like and may have small inaccuracies. If you want, here's an untouched version of the box front. 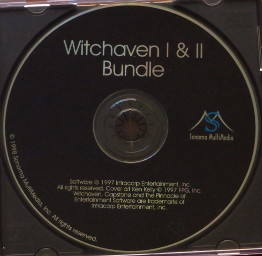 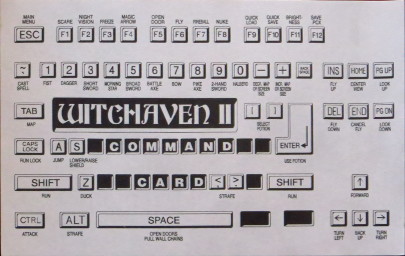 I do not have a CIB copy of this release, but I do have the CD-ROM only which is plain black and labeled "Witchaven I & II" in red lettering - it is possible there is a different bundle release with different CD labeling though? From other people's photos it appears that this release included separate printed manuals for both Witchaven and Witchaven II, but unlike the previous big box releases, the manual covers are in black & white. The box cover picture is a diagonally split blend between the "Death's End" and "Field of Fury" box illustrations. 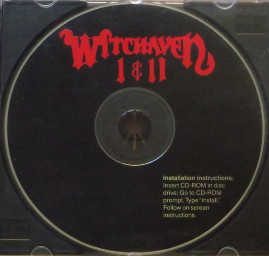 A re-release which includes both Witchaven and Chronomaster on one disc, illustrated with a diagonal split between the two games' box cover art. The copy I have lacks any of the packaging it may have originally have come with. 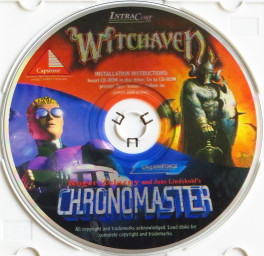 A seven-game budget compilation from Softkey, including the full retail release of Witchaven. 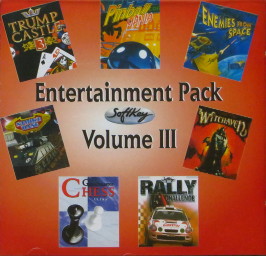 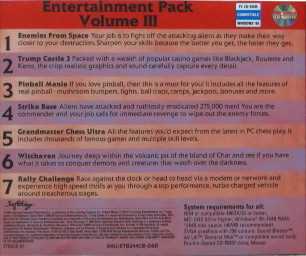 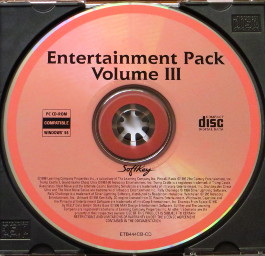 A CD-ROM release including the September 25 demo, a newer/more complete demo version of the game compared to other demo releases, but still containing only the first three levels. The disc appears to have been manufactured by Lasersoft. The jewel case insert is illustrated with "Death's End" similarly to the full retail release, but with different text marking this as a demo version. The inside of the insert includes a $5.00 coupon for a discount on the full retail version of the game. 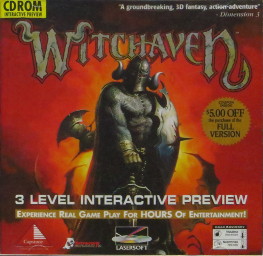 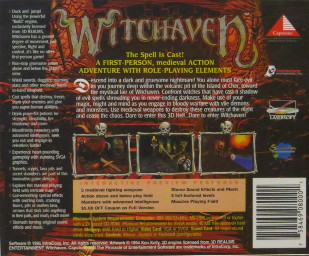 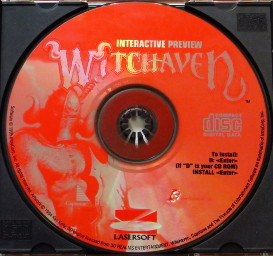 A third-party shareware disc including demo versions of William Shatner's Tekwar (which the package inconsistently refers to as "Tekwars" in some places) and Witchaven. The Witchaven demo included is the July 21 one. The front jewel case insert is illustrated with a skull, syringe and atom design, while the back cover shows screenshots from both games. 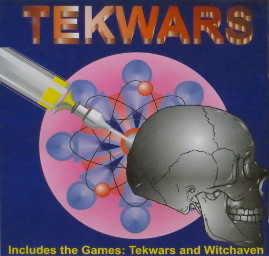 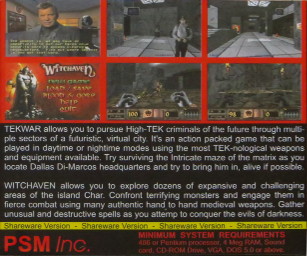 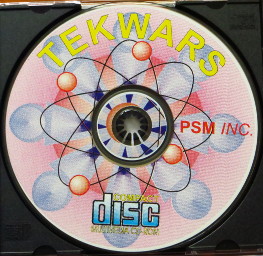 A shareware floppy release consisting of five 3.5" disks, with plain labeling. The Witchaven demo contained on the disks is the July 18 one and is copied to hard drive by a simple custom installer. 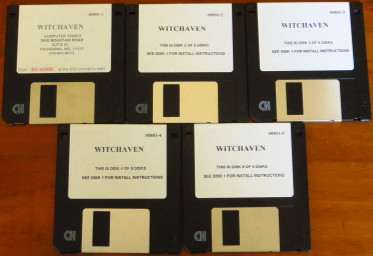 I have seen evidence of the following variants, but do not have copies of them:

Here are clean, high resolution versions of the Ken Kelly paintings used as the Witchaven and Witchaven II cover illustrations: