Here you can find levels and hubs to download for Heretic II. Make sure to preserve directory structure when you unpack these for the more extensive mods; single maps can go in the base\maps subdirectory of your Heretic II install directory and be loaded with the console's "map" command. The download will usually contain further instructions for loading the modifications correctly. Many also expect you to have your copy of Heretic II patched with the v1.06 update.

If you want, you can jump directly to a subsection:

Singleplayer levels by other authors: Collected levels which can be played in single player. These were played to completion to make sure that they work.

Deathmatch-with-monsters levels by other authors: Collected levels which are designed for deathmatch, and lack important single player functions like an exit trigger, but do have some monsters to kill. I have not checked these in a proper multiplayer game.

Deathmatch levels by other authors: Collected levels which are designed for deathmatch only. As of this posting these were verified only in so far as making sure they load in the game and can be explored.

Botmatch mods: Modifications which allow deathmatch levels to be played against a simulated player.

Levels by other authors

"Shadow Slayer" by Dann Pigdon
A set of six levels taking place after the original campaign, detailing the quest of Lanius the Sidhe in the Cauthorian homelands, seeking to defeat the Cauthorian slavers and their overlord, the Shadow Slayer. There are several new graphics, including textures, scenery and character skins, most of which are quite well done. The levels also include some neat tricks and traps that I did not anticipate. A quality set.
NB: This file is repacked to combine the Shadow Slayer game files and Shadow Slayer help and story documents into one download. 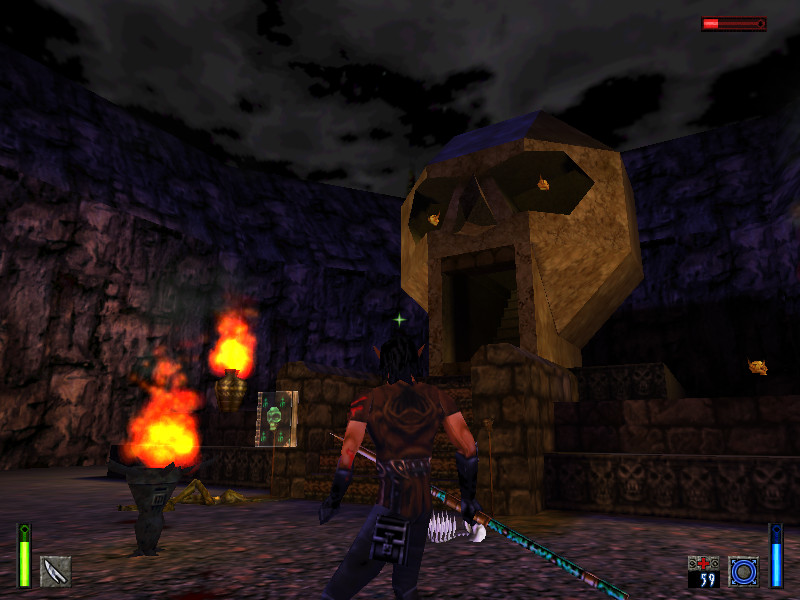 "The Abode of Golgotha" by Oliver Smiles
This six-level hub has the protagonist, Kurien, searching for his missing friend Suraea in a creepy mansion steeped in dark magic. A unique set that uses the stock Heretic II resources to create an environment more in the style of Lovecraftean horror than the usual fantasy; the gameplay is also laid out more in the vein of a horror game, with limited health restores and a lot of adventure elements. 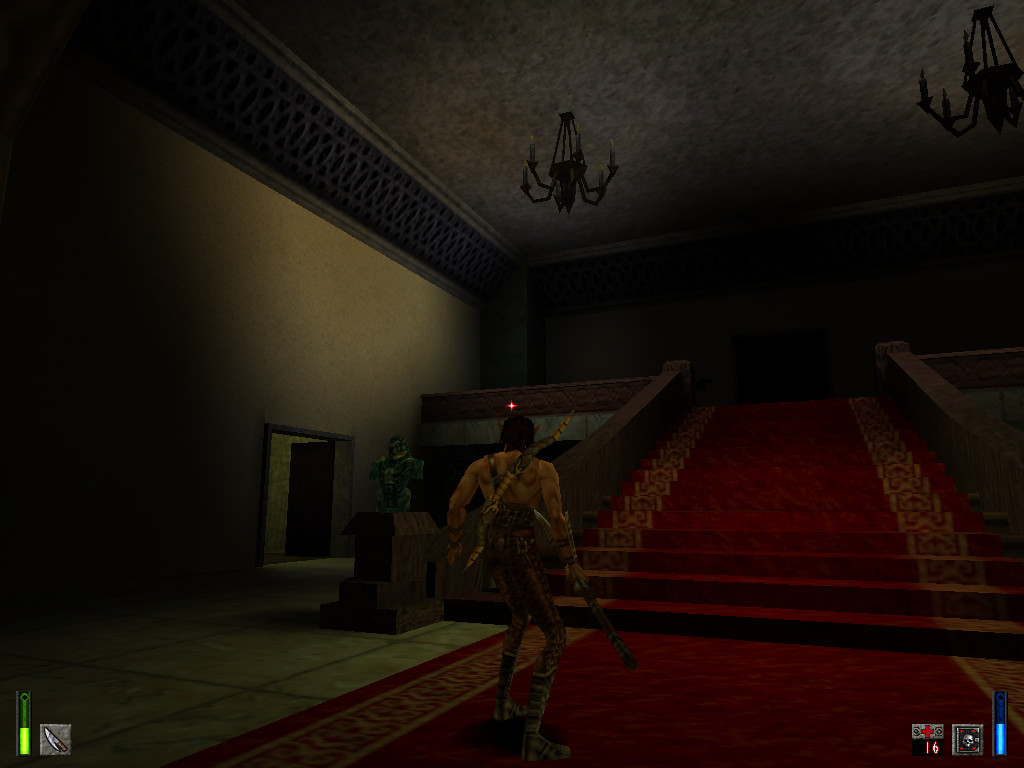 "Zombie Town" by Rogue Rodent
A set of two levels exploring a town where the plague carriers are experimenting with a variant strain of the plague. The levels are quite atmospheric and detailed, including some operable traps and execution machines, although most of the opposition appears in the form of plagued Sidhe and progression can be a bit cryptic at times. Both levels are built around the same area; passing from the first to the second causes areas to become accessible, changed or blocked off as the adventure progresses.
NB: This file is repacked to combine the base Zombie Town files, map one and map two into one download. As far as I know, further parts of the series were not released. 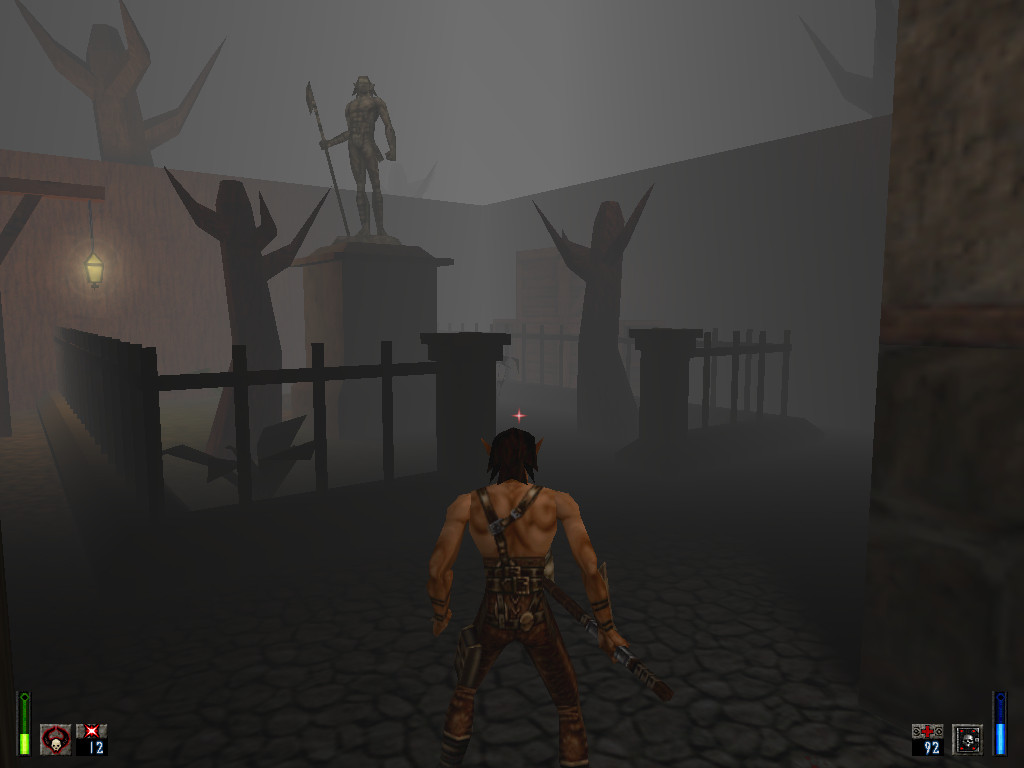 "Sacrifist" by Sammy F Simegi aka Stormchaser
Two single-player maps (one regular map, and a boss/finale map) set in an underground dungeon of sorts with some tricks and traps to discover. 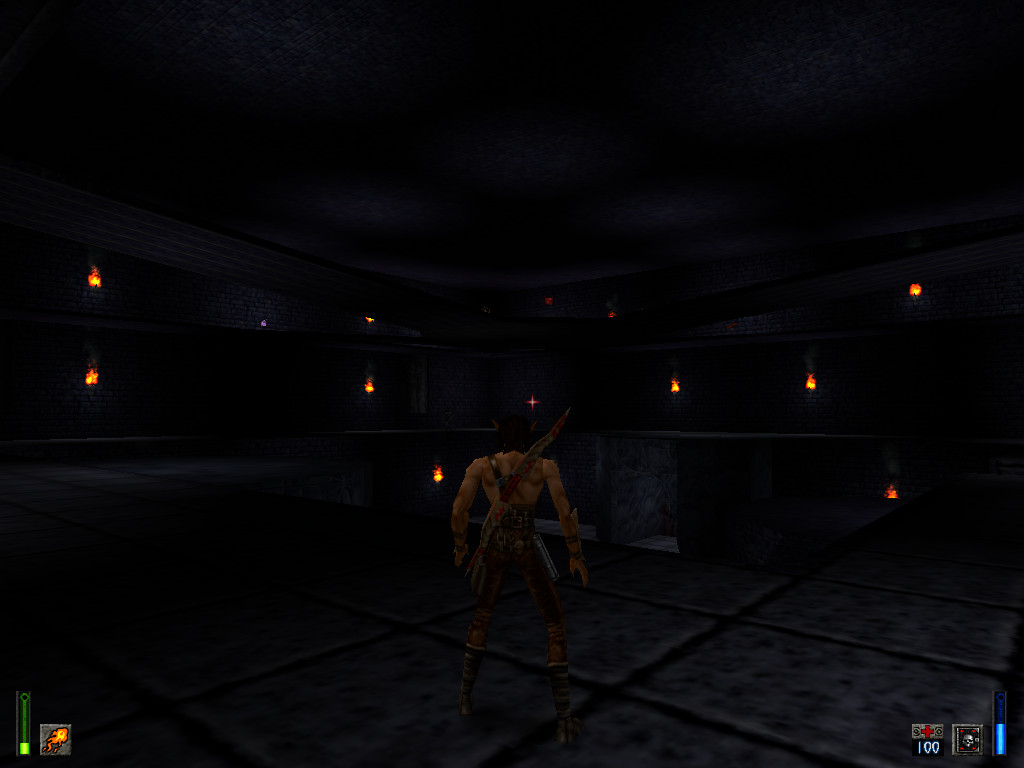 "Blupipe" by Mark Smith
A short Sidhe-village sort of level that includes making your way through a perilous pipe (which does not, however, appear to be blue.) Reaching the exit kicks you back to menu while the level seems to remain in the background. 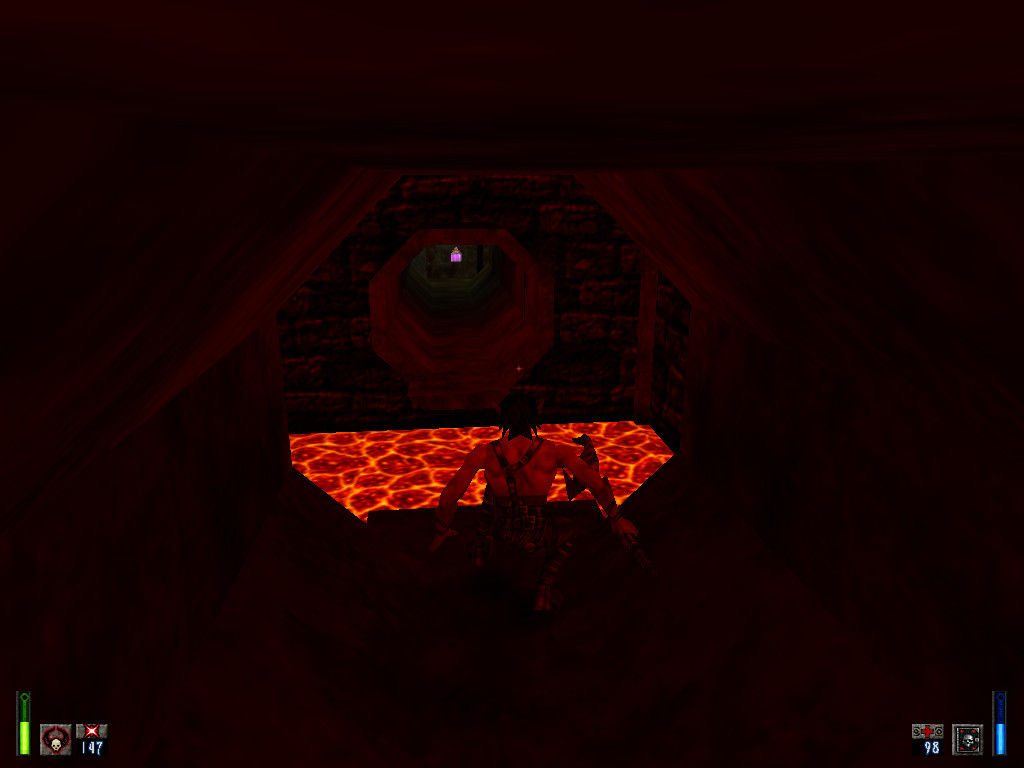 "Silver Spring Asylum" by Voltais
A single level using primarily the Silverspring texture themes but with some fairly nasty opposition from the enemies making it a rather tough level. You can run past the boss to the exit though. The colored lighting is pretty heavy-handed some places in this one, as well. 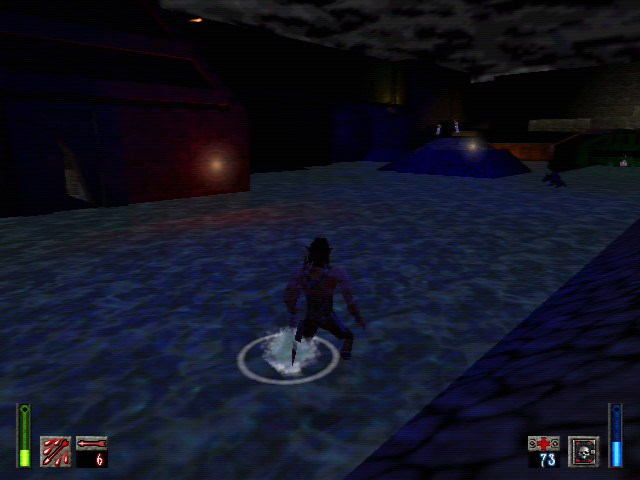 "Corvus Chronicles: Lost City of Ice" by Balr14
An incomplete but playable four-level adventure that, despite the title, seems more like a swamp or jungle themed set than ice. You'll climb rock faces, plunge into the underground, swim through watery tunnels, fight in a town and more. Towards the end it does become apparent that the set wasn't finished though, with some texture errors and no exit in the last level. There are also some odd design choices and textures that don't mesh well with the Heretic II aesthetic. I found the sawmill level in particular to be both glitchy and annoyingly designed, but it's the least finished map of the set. Still, this is one of the longer sets out there, that will give a decent amount of play time despite not being finished. 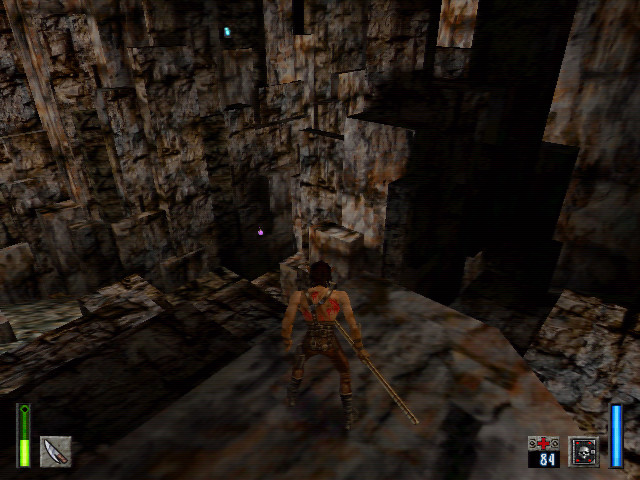 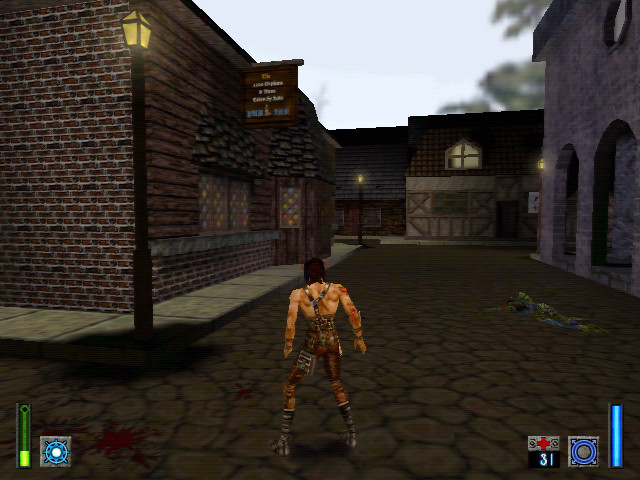 "A Forgotten Island" by Alan Williams
Two levels set on a tropical island with lots of rivers and waterfalls. The levels are full of puzzles and lethal traps that require a great deal of precision to pass. A little buggy in places (occasionally you get ejected from the map). 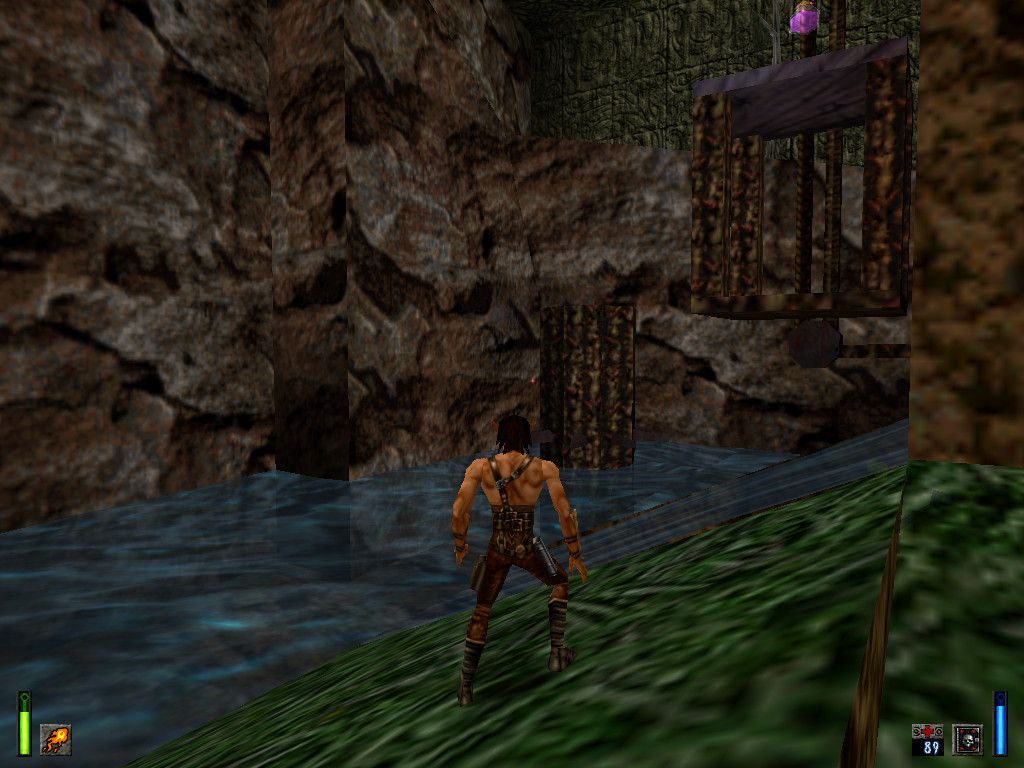 "Head" by Wydraz
A level that can be played single or multiplayer, including a water area with ropes, a lava area, and a boss arena. 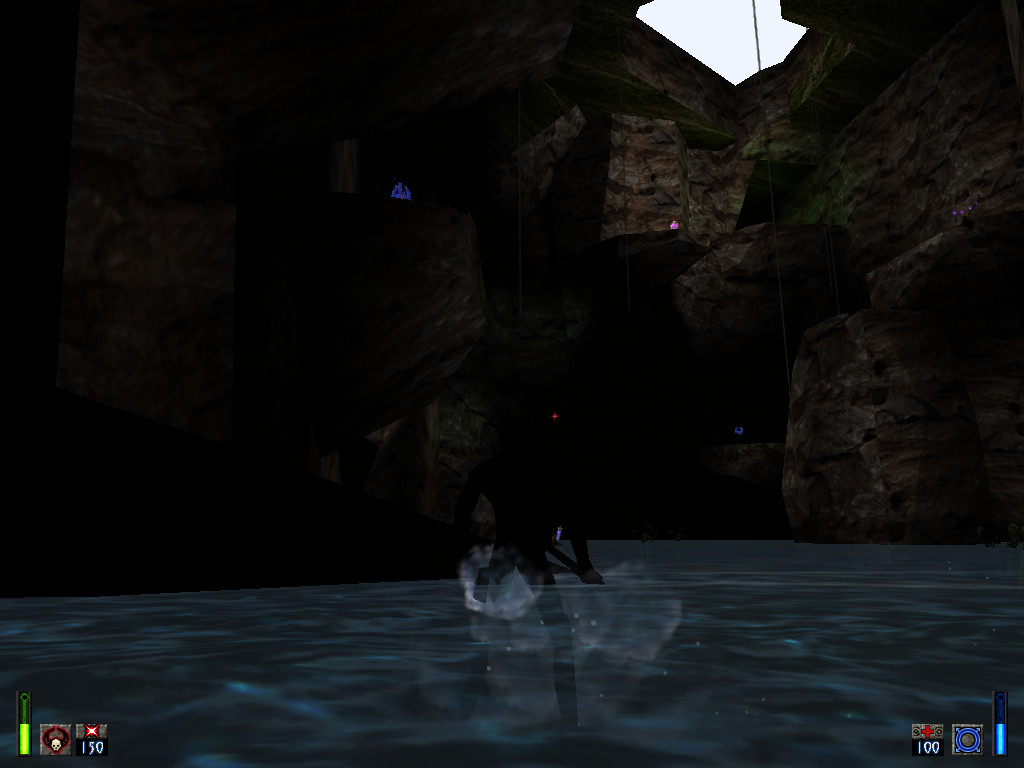 Multiplayer-with-monsters levels by other authors

"Turtle Village" by Dewo & Eugene(U.R.C.)
A village arena map inspired by Turtle Village from the game Golden Axe; a small village on the back of a gigantic turtle. A few graphics are included, most if not all rips from Hexen and other games. More of a multiplayer map but monsters are included for single play, however, as far as I can tell there is no exit to the level once you kill them all. 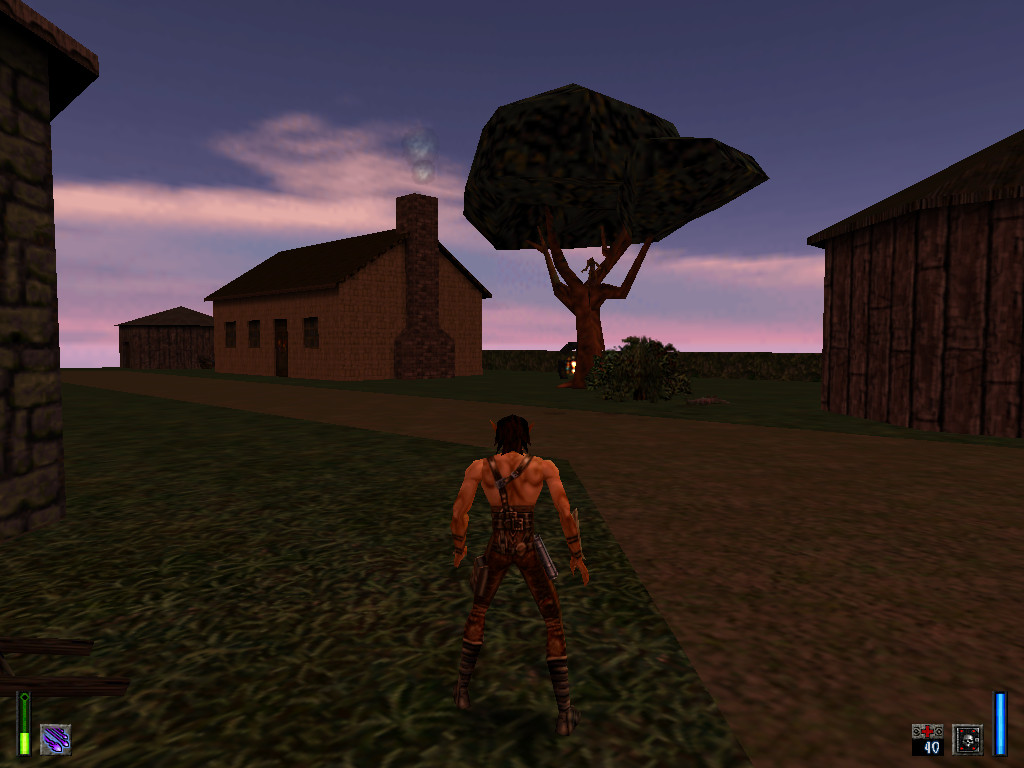 Multiplayer-only levels by other authors

"The Octagon" by tony (browndog) brown
A bladematch arena with a lift and octagonal platform in the center. Apparently designed for dueling with a special "winner stays" setup. 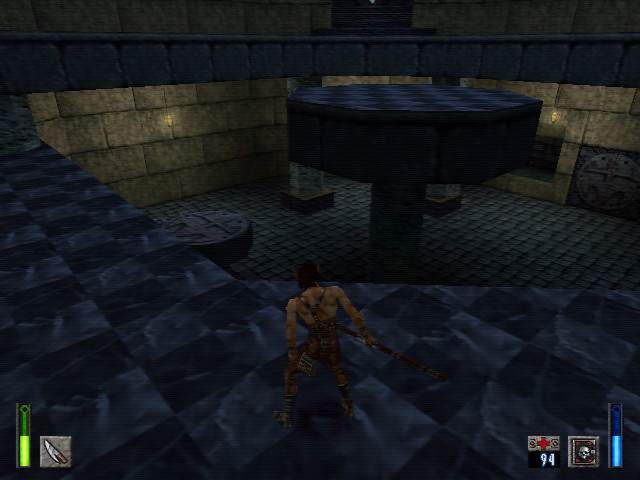 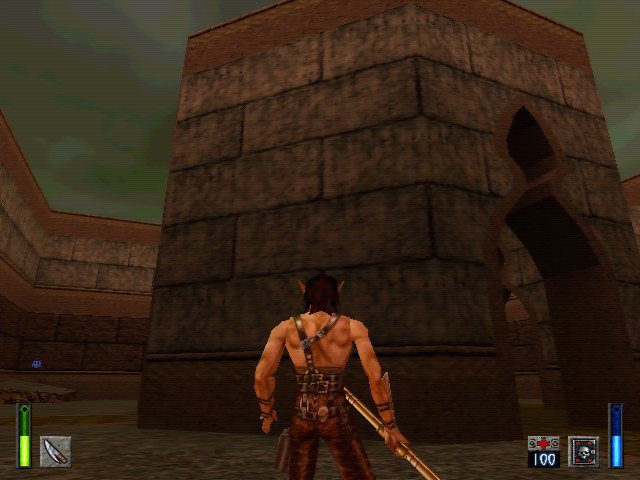 "THE COURTYARD" by DEADSTAR [Daniel Kruzic]
Deathmatch in a castle ruin type of setting including a raised walkway over the main area reachable by a lift, and a chaos shrine. 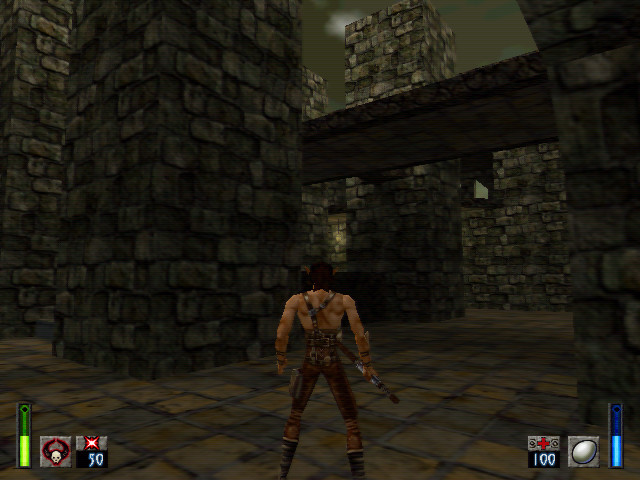 "Dmtristram" by Lord Grimjaur
A deathmatch level based around the town of Tristram from the original Diablo. Very foggy, but the layout's been nicely translated. To load this map, you must be in deathmatch mode—there's no single player start. 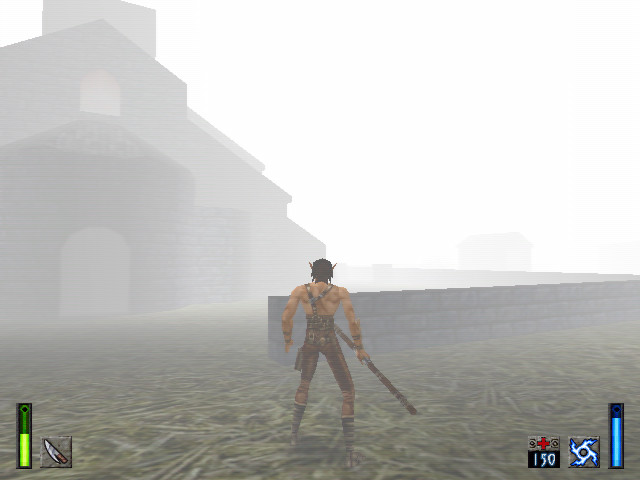 "Sacrum Sacrifice" by Ned Man
Deathmatch in a temple of sorts with a lava pit. 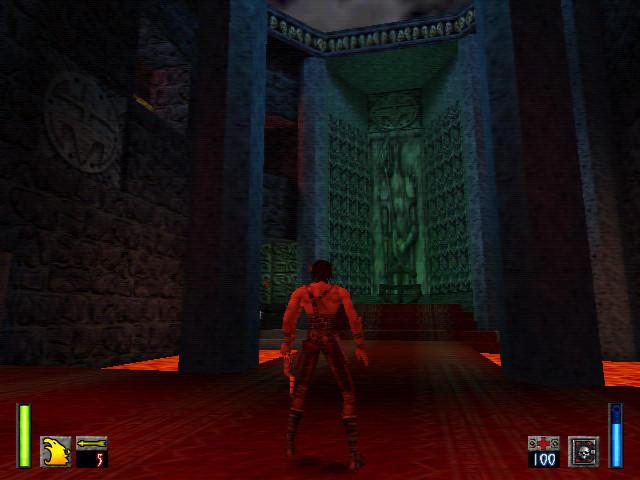 "Karvok" by Tet
A nice-looking deathmatch map with varying heights, a low passage to roll under, etc. Watch out for that lift, though, it can crush you if you're too far to the edge. 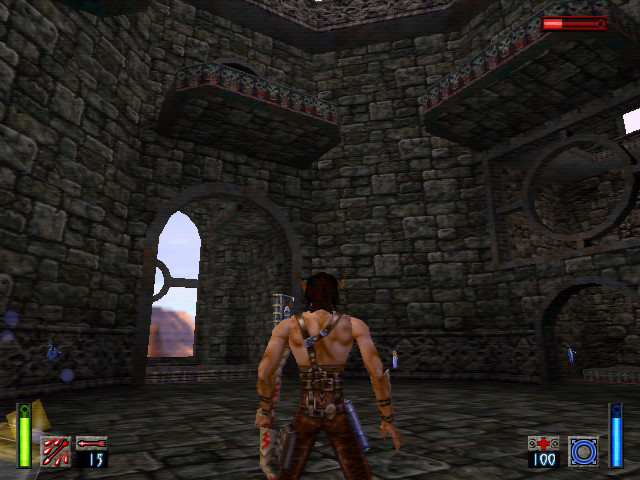 "Nero" by Monkey Wrench
A tiny deathmatch ring with a lot of items and some dangerous patches of lava. The edges are invisible walls, so you can't fall off (and you can wallkick off of the sky). I guess this could be some silly fun with the right mentality. 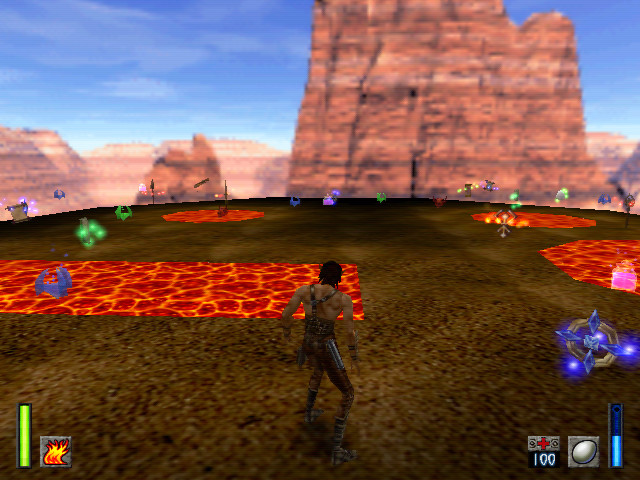 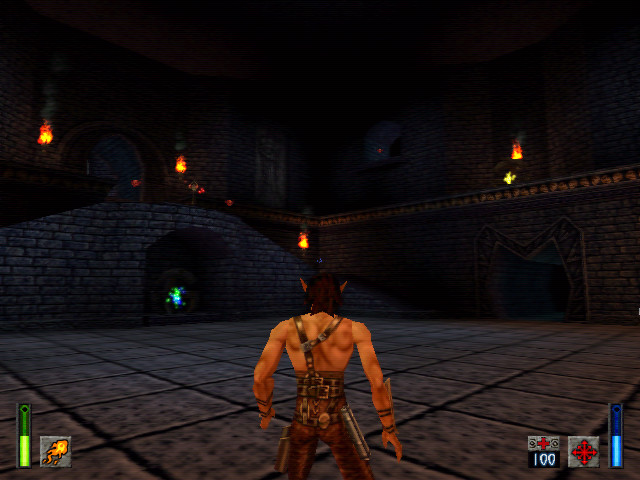 "DREAD REMEDY" by DEADSTAR [Daniel Kruzic]
Deathmatch in a cathedral-type environment, with a little outdoor area and some climbing ropes. Looks pretty nice. 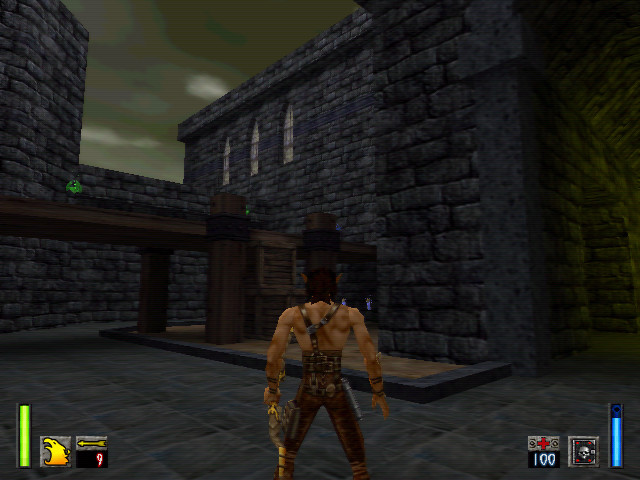 "BLOOD REMEDY" by DEADSTAR [Daniel Kruzic]
Deathmatch in a castle-type environment, with a small bit of lava. 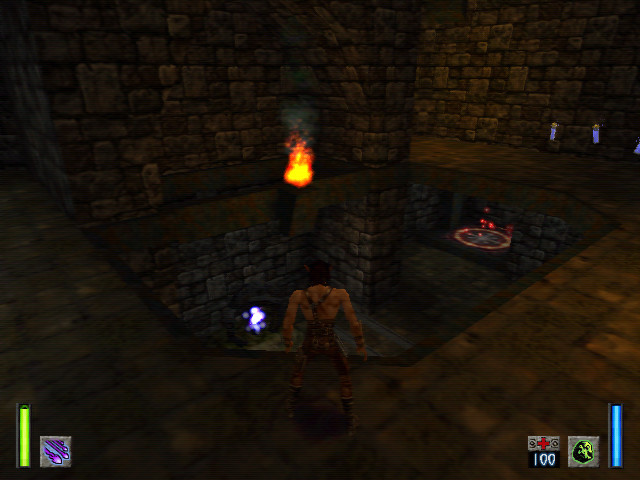 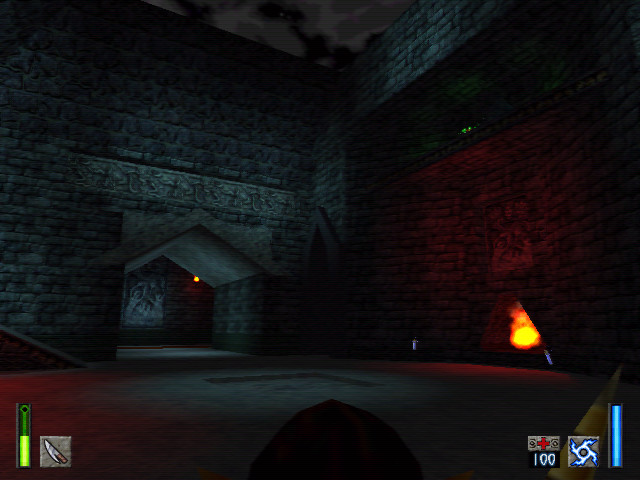 "The Web of Stone" by Voltais[A3]
A surreal deathmatch area made up of a bunch of ramps and some decorative stuff along the sides, with a lot of colored lighting. Strange but possibly fun, climbing the ramps is pretty smooth with none of the sticky edges that you get in bad maps. 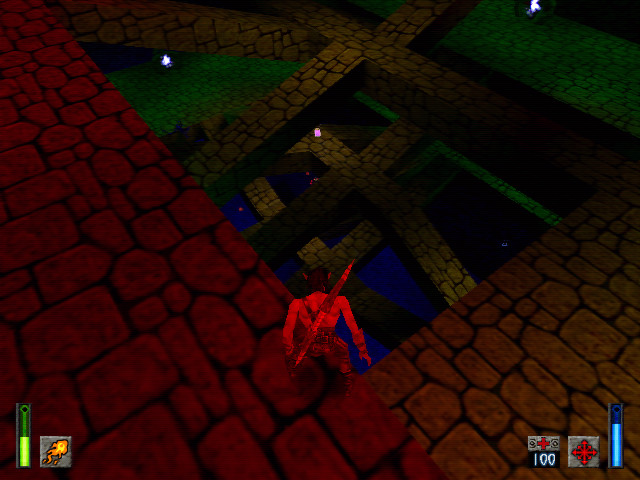 Grinbots v0.9 by Grin
This mod, based on Steve Yeager's ACE Bot for Quake II, allows you to play deathmatch levels vs. an AI opponent. They can play regular FFA, and also offer some support for blade matches and a bot-vs.-human teamplay mode. Bot players can be tweaked with several options including using various player skins, adjusting which weapons are preferred/banned for the bots' use, and customizable bot chatter. The bots use special pathing files in order to play better on specific levels - path files for the default deathmatch levels and several custom ones are included.