Here are some tidbits of trivia you might not have known about the Witchaven games.

The box cover illustrations are by Ken Kelly, although both images existed prior to the creation of the games rather than having been designed for them. The painting used for the Witchaven I box is titled "Death's End" and you can even buy a 20" resin statue based on it for the low, low price of $2,500. The one on the Witchaven II box is called "Field of Fury".

The black metal band Witchaven is named after the game, as one of the band members was a fan of it when he was young and their initial choice, "Witching Hour", was already taken. (Citation)

The games predated the ESRB rating system, but did feature the RSAC Advisory ratings which rated various offensive aspects on a zero to four scale. Both games received a level 3 violence rating ("Blood and Gore") while Witchaven I was additionally rated level 2 in nudity/sex ("Partial Nudity").

Similarly to Corridor 7 (an earlier Capstone game), the Witchaven games contain a jumpscare feature which causes a demonic phantom skull to occasionally appear in front of the player, accompanied by a dramatic sound. The skull has no effect on the player character's stats.

The experience level names in Witchaven II were borrowed from old versions of Dungeons & Dragons; the names "Swashbuckler" and "Myrmidon" that would be between "Hero" and "Champion" in D&D were omitted but the progression is otherwise identical.

If you play "track 3" on the jukebox in Witchaven II (options > sound), Cirae-Argoth will run onscreen and dance. (Demonstration video)

The Witchaven demo versions include the first three levels of Witchaven I, however, in most of them the maps are slightly different from the release versions. Also, these early releases had a potion to increase your armor instead of the cure poison potion, and the short sword was not yet present. For further info, take a look at the Witchaven versions page.

The rat sprite used in Witchaven II made an earlier appearance in another Capstone game: Operation Body Count.

The .ART files for Witchaven I include quite a few unused resources, including several incomplete monsters (one of which is mostly functional), a skull-and-crossbones icon for poison, and pickup sprites for a war hammer and a giant mallet.

A number of the decorative elements in the game's graphics are based on images featured in Stephen King's book "Nightmares in the Sky". These photos, taken by "F-Stop Fitzgerald", were also used as a basis for graphics in other games, including Doom. It is possible that they were released at one point as some form of stock resource, but no confirmation of this has been found.

An unused feature called "HEALTHWATER" exists in the code which behaves like an opposite of lava, healing Grondoval when he stands in it. This feature is still functional in the executables but the HEALTHWATER tile in the .ART files is an ugly placeholder. It is possible that this was originally meant to be similar to the health chambers in Corridor 7.

The internal name of the Freeze Spell in source code functions is "medusa", suggesting that it may at one point have been intended to turn enemies to stone rather than ice.

Witchaven II contains a statue with a brazier that appears to be influenced by the one that appeared in Raven Software's Heretic.

Witchaven II was Capstone Software's last finished game. Their next game was to be a sequel to Corridor 7, but was not completed before their parent company went bankrupt. Another game, called Fate, being made for Intracorp was likewise never completed.

If you look in the credits screens for Witchaven, you will notice a credit for "Story & Original Maps: Mike Pitts". Mike Pitts, along with Jon Emmons, created several tabletop RPG supplements under the name Wyrm Works, the fourth of which was titled, you guessed it: Witchaven. First released in 1992 and reprinted in 1994, Wyrm Works' Witchaven is a set of 20 looseleaf maps for tabletop RPGs such as D&D.

The set is described on the back cover sheet thusly:

"Witchaven is set near a volcano. This twenty page set is the most densely drawn of any of the WyrmWorks maps. It features a central conjuration room which is connected to a lava pool by a long shaft lined with magic metal. Other features include: A large holding room for monsters, slaves, and the like; an auditorium; and hundres of room complexes and apartments for housing witches (or anything the game master wants!). Like all of the other sets many of these maps can be mixed and matched to be used as smaller lairs or as individual maps."

(Yes, the "hundres" spelling error is verbatim from the sheet.)

Although in most cases the level designers at Capstone seem to have come up with their own layouts, there are at least two levels that can be clearly traced to the Wyrm Works Witchaven set: 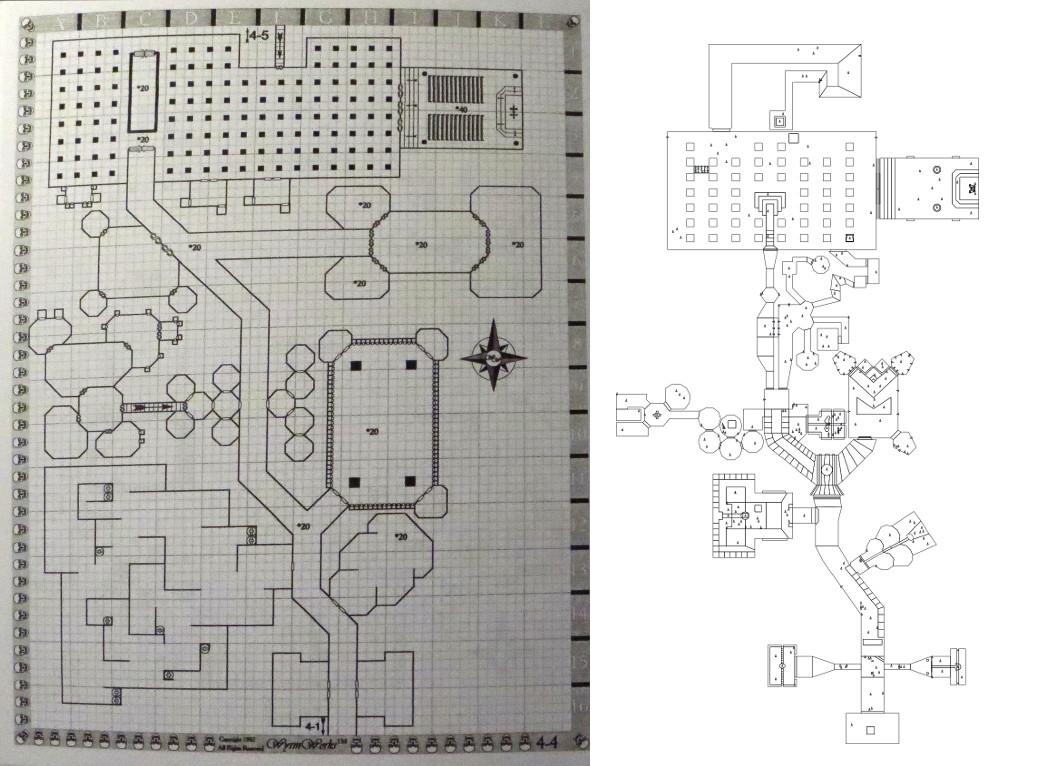 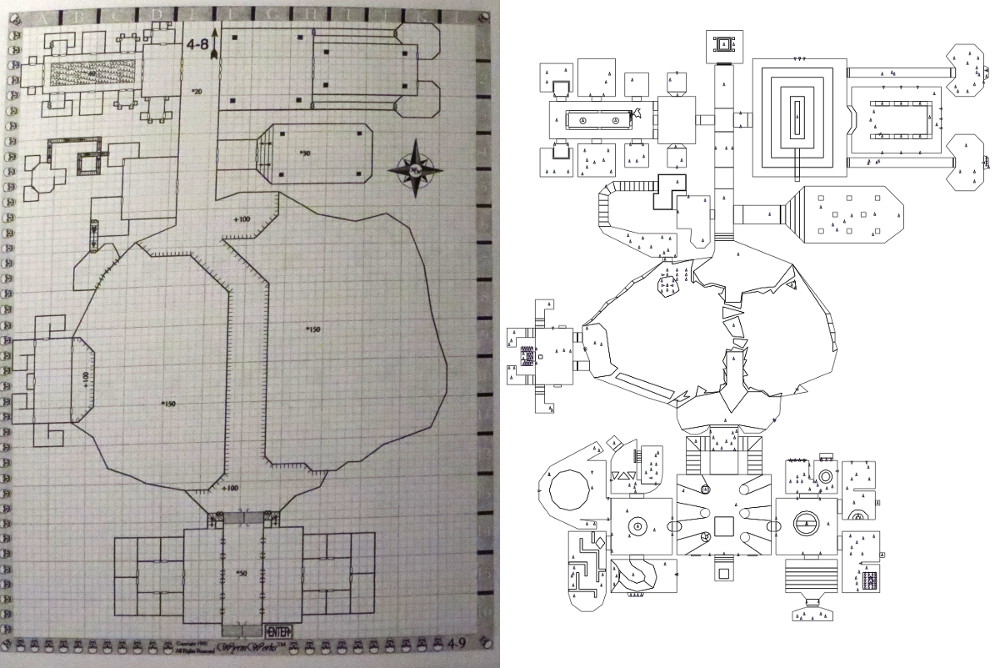 None of the maps from the earlier "Bricks & Bones" set appear to have been used. I have not (yet?) checked other Wyrm Works offerings to see if any maps from them were also used as a basis for Capstone's game.

Box shot of a cut level

Having played through the game several times as well as examined the map data with level design tools, I can say with a fair degree of certainty that the scene depicted in this shot on the retail Witchaven box does not appear anywhere in the game. I recently received an e-mail from Ernie Roque explaining it:

"This was actually one of the first maps we created to test the capabilities of the engine. The characters did not exist at that point so they were photoshopped (actually DeluxePainted) in there. But it was a massive level where you could go into the hull of the ship with spiral staircases and had secret doors that opened into massive areas hidden inside the mast. Good times, good times."